IBM pimps Watson out to Hilton robot for concierge duty 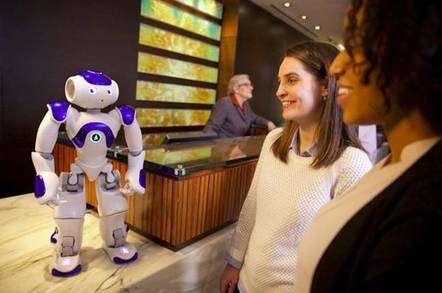 “No madam, we don't rent rooms by the hour”

Pics and video Big Blue is making another effort to make a business case for the Watson deep learning system, this time by porting it to a robot concierge in the Hilton McLean in Virginia.

The robot, dubbed Connie after the Hilton founder, is an off-the-shelf Nao machine from French manufacturer Aldebaran Robotics, linked wirelessly to Watson.

The 23-inch (58-cm) robot uses Watson to understand basic questions about the hotel and also links into travel info service WayBlazer to give details of local attractions.

"Watson helps Connie understand and respond naturally to the needs and interests of Hilton's guests – which is an experience that's particularly powerful in a hospitality setting, where it can lead to deeper guest engagement."

Acting as a glorified desk clerk is a bit of a step down for Watson, which was once touted as the next big thing in AI systems. Despite taking an early lead in the deep learning field, IBM has struggled to make a compelling business case for the code, and other machine learning systems are doing much more exciting stuff.

While some tourists might be impressed by Connie, others will think it somewhat passé. Japan's Henn-na Hotel (translation: Strange Hotel) near Nagasaki is staffed almost entirely by robots, and many more robot hotels of a similar kind are going to be built once the bugs have been worked out.

Connie will only be making an appearance in one Hilton hotel, which makes the whole exercise look a bit pointless. But if Connie has 'em flocking to the delights of its Virginia property, located between two freeways just to the east of Washington DC, then Hilton might expand the program.

"We're focused on reimagining the entire travel experience to make it smarter, easier and more enjoyable for guests," said Jonathan Wilson, VP of product innovation at Hilton. "By tapping into innovative partners like IBM Watson, we're wowing our guests in the most unpredictable ways." ®

Watch an AI robot program itself to, er, pick things up and push them around

Vid Why can't robots just learn to do things without being told?

Oracle, for one, says we'll welcome our new robot overlords: '90%' of you will obey an AI bot