Chalk one up for Skynet – for now. Still time for Mankind to pull it back 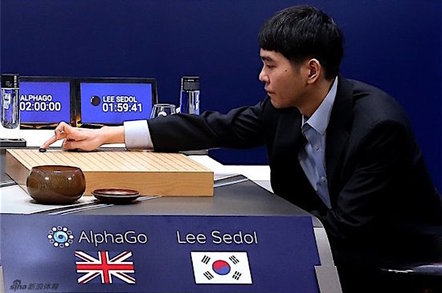 Google's DeepMind machine learning system has beaten South Korean Lee Sedol, the top-ranked Go player over the last decade. It is being hailed as a milestone in the development of artificial intelligence.

The DeepMind AlphaGo won a concession from Sedol in the first match of a five-game series between the Alphabet-owned cluster and the world's top-ranked Go player. Sedol will have four more chances to win back the title for mankind between now and March 15.

Even if Sedol can recover and rally to claim the series, the match win is being hailed as a major accomplishment for the DeepMind team because of the significant challenges a game of Go presents for a computer.

Played by strategically laying one of two colors of pieces (called "stones") on a grid, the number of possible moves in a Go game can reach around 2.08 x 10170. This makes conventional calculation of the best possible move all but impossible with current hardware, and prior to AlphaGo, computer systems were unable to play at the level of top human players, let alone the 9-dan-ranked Sedol.

DeepMind worked around the problem by changing the way it analyses moves on the board, including learning from past games against humans to recognize tendencies and spot strategies. This allowed DeepMind's AlphaGo software to play at a level previously thought to be unreachable in the near-term.

Congrats to DeepMind! Many experts in the field thought AI was 10 years away from achieving this. https://t.co/5gGZZkud3K

While Google's APAC team described the game as a "neck-and-neck" affair, Sedol said he was "in shock" over the loss, telling NBC News "I never thought that AlphaGo could play so perfectly," with the software making moves "that could not have been possible for human being to choose." ®