Alice, Bob and Verity, too. Yeah, everybody's got a story, pal 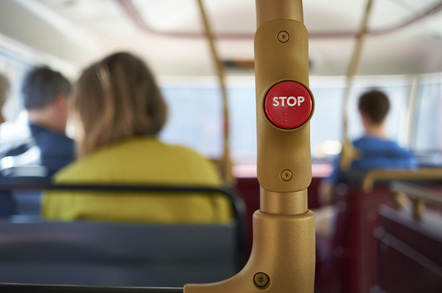 Stob Once there were a million A&B stories on the Naked Web. Now there are a million-and-one.

Alice and Bob are two commonly used placeholder names. They are used for archetypal characters in fields such as cryptography, game theory and physics – Wikipedia

I had caught the H[redacted] bus heading east (via Turd Park, Central Reservation Hermit Halt and Chiz Poundland) and, as the full-ish vehicle lurched off down the motorway, had been obliged to scramble upstairs to secure my gotta-getta-double seat.

I sat down by the window and, instead of settling down sensibly with my phone like the other passengers, I pulled out the iPad: my phone's teeny fonts may be “retina-friendly” but they are deffo elderly-programmer's-peepers-hostile. Error #002: I failed to plug in my annoys-cancelling headphones, and instead pulled up the above-cited Wiki page. So I really had no right to be surprised to find a middle-aged man in the act of sitting down next to me, trapping my coat.

Yeah, right. I'm surprised he doesn't tell me not to make any sudden moves, and to keep my hands and my mobile device where he can see them. The bus nutter. Transport for London should license them, like buskers, another group that bothers weary travellers with gratuitous noise. I can just imagine the Official Bus Nuttercard with a TfL logotype slogan “Every nutter natters” over the facsimile signature of Boris, Mayor of London and Earl of Brexiter. Damn it. And now he was reading my iPad...

“Who says I want to know?” I replied tartly, flirting with the fantasy of putting him off.

“Alice is a devops manager, I think that is the correct phrase. A person not well tuned to the needs of those around her. The sort of woman who waits until she has reached the front of the supermarket queue, and only then digs out her mobile to make an interminable call to her cat-sitter. Everybody behind her has to watch her pack twenty-two tins of KittyFishy into her five pee carrier at glacial speed using only her left hand. All the while chatting loudly about next Thursday's emergency litter arrangements.

“Alice has face like a sucked lemon and if she tries to smile it goes all one-sided about the mouth: think TV's Anne Robinson, or the Right Honourable George Osborne MP, Chancellor of the Exchequer, or Great Auntie Mary after her second and final funny turn.

“Wait a moment”, I interrupted. “Are you saying Alice and Bob are real?"

“Well of course they are real. Why talk about them if they aren't real?” he snorted impatiently. “As it happens, they work in that very building, there,” and he gestured outside the bus window.

We were waiting for the lights near one of those ugly, dead-eyed office blocks that graze the gritty shingle either side of the M[redacted] motorway's elevated section where it sweeps into W*st L*nd*n.

As I peered dubiously at the grim building, now unexpectedly identified as the world's primary location for practical cryptology, a thought bubbled feebly to the surface.

“But if they work in the same office, why do they need to keep sending each other all these encrypted messages? Couldn't they just talk to each other?”

“I was getting to that. Bob is a nice enough geezer I suppose, but he knows stuff-all about computers, so naturally they put him in into IT management too. He has been Alice's oppo, her number two, for some years now. But last summer they went off to some corporate jolly together, stayed the night in a Premier Inn. And what do you think happened?”

The question was rhetorical and invited no reply, but I took the opportunity anyway. “They were perhaps slightly disappointed by the quality of the free Wi-Fi? Dunno, but if you wait a moment I could WhatsApp Lenny Henry.”

“They hooked up. They became an item.” He shook his head in disbelief. “I mean, Bob with that cold fish Alice. Bob who had never previously shown any interest in the ladies. Not that I had Bob down as gay, precisely. Just that, I think this is the correct phrase, he'd be prepared to help out if they were short-handed.” He paused to allow me to digest his assessment of Bob's sexual proclivities.

“Anyway. After that they were all over each other, holding hands during stand up meetings, driving everybody mad. Then one day, something Eve from accounts said gave Alice the idea that she, Eve, had somehow got into her email. She overheard Eve quoting part of Alice's Valentine’s to Bob with suspicious accuracy:

‘Dear Robert. I do so love it when you go south with Mister Bunny – let's have some more tonight you naughty boy! XXXX + rude emoticon. PS Don't forget your annual assessment at 15.30. Please bring in your completed form, taking care to fill out Section 4 – Identify Five Opportunities For Me To Improve.’”

“What a heart-warming message,” I said, as the bus did that unnerving hybrid thing which sounds like the engine has stalled in mid-air. We were just passing the B&Q turn off – not long now.

“Alice was not best pleased to discover that her communications with Bob were in the public domain. She put in some evenings doing a lot of reading up on the web, then swung into action.”

“Aha,” I said, feeling we had finally got to a part of the story I recognised. “Alice bought a brand new padlock and cashbox from Rymans, locked her message in the box and sent it to Bob, retaining the key?”

“Not quite. She bought a brand new padlock from Robert Dyas, kept the padlock and put the key in the box and sent it to Bob via the intra-office mail.”

“Did that work?” I said, feeling confident I had spotted a flaw in Alice's security scheme. What if Eve intercepted the box and copied the key?

“It did not. Bob didn't understand what Alice was trying to achieve, but he wanted to show willing. So he bought a new set of lingerie from Love Honey, sent Alice the underwired bra and kept the knickers.”

“Did Eve get hold of this incident?,” I wondered.

“You bet. Every time she saw Alice in public for the next month, Eve would loudly pretend to invite her to her next Anne Summers party "because I know you do love your peek-a-boos."

“After that, Alice got serious about privacy, and taught Bob not to write his password on a post-it, and to communicate securely using quantum signals and the wave/particle duality of photons, and all sorts of clever security tricks. But it doesn't do any good. Eve can always be found outside, sharing the latest goss with the other smokers.”

“But how is it done? I mean, is Eve a brilliant hacker, or something?”

“Oh no, it's much simpler than that. Bob enjoys the nookie with Alice – I believe he has got a kink about asymmetrical mouths – but he doesn't really like her. And he and Eve go way back, so he always keeps her up to date.”

“Are you saying that all the... effort that Alice has been putting into cryptology is just a waste of time? She might as well conduct her affairs with a loud hailer?”

“Not at all,” said the sage of the H[redacted]. “I haven't even told you about what happened when Carol came along. Now Carol worked for Alice's rival Dan, and their bosses and Erin and Faythe...”

“Excuse me,” I said, “but this is my stop,” and I barged past Mallory, skipped gaily down the stairs and out into the sunshine. ®