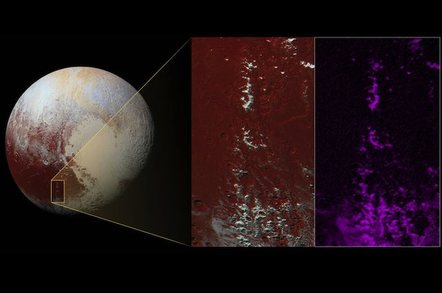 The image at the top of this story (or here for readers on mobile devices) shows Pluto (left) and in the insert depicts what NASA describes as “a mountain range located in southeast Cthulhu that’s 260 miles (420 kilometers) long.”

Sharp-eyed Reg readers will have noticed that some of the mountains are a rather different colour to the prevailing background. Current thinking is that those white, shiny, patches are ice.

John Stansberry, a New Horizons science team member from Space Telescope Science Institute, Baltimore, Maryland, opined: “That this material coats only the upper slopes of the peaks suggests methane ice may act like water in Earth's atmosphere, condensing as frost at high altitude.”

The third of the images atop this tale depicts an image captured by New Horizons' Ralph/Multispectral Visible Imaging Camera. The purple indicates high concentrations of methane. NASA thinks the similar coverage for the white patches and the prevalence of methane further bolsters its methane-ice-capped mountains theory.

All of which could mean that the eyeless horror known as “snowboarders” might one day find reason to visit Cthulhu Regio.

New Horizons snapped the images above from a distance of 33,900 kilometres, just 45 minutes before the probe's closest approach to Pluto on July 14, 2015. ®