But it actually makes more sense than that 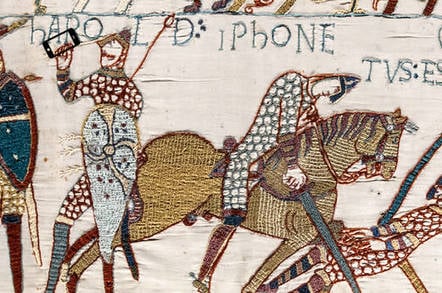 Analysis OK, we got it: Apple good, FBI bad.

But seeing as the court case between these two powerful institutions is taking on ever-increasing importance, we figured it was time to actually listen to what law enforcement has to say about the case of the locked phone.

And the truth is, it makes a lot of sense. Certainly enough sense for it to be required reading for anyone who wishes to be taken seriously on the issue.

And then on the other hand, the formal arguments cite the Norman Conquest, make up crazy terms like "cyber pathogen" and try to stretch the law from illegal gambling to all our personal lives.

In short, it's a mixed bag.

While Apple has been listing the briefs filed with the court on its website, we note one missing: the 18-page argument in favor of the FBI's position by the Federal Law Enforcement Officers Association (FLEOA), the Association of Prosecuting Attorneys (APA) and the NSA. No, not that one, the National Sheriffs' Association.

This joint document [PDF] effectively represents the law. The people who keep everyone safe on a day-to-day basis by tracking down criminals and using the legal system to ensure they get punished for their crimes. The folk that make the difference between living in 2016 and 1886.

So what do they have to say?

A big part of the facts-based argument for access to people's phones is taken from a 42-page report produced by New York District Attorney Cyrus Vance – who also appeared at the recent Congressional hearing on the FBI-Apple case.

Vance produced a list of real-world cases where access to people's phones has led to real evidence, which has led to real convictions. They are somewhat harrowing, as was no doubt the intention: a man who accidentally filmed his own murder; two rapists caught discussing their use of mace spray; photos leading to the convictions of pedophiles and sex traffickers, and so on.

The report also notes a recent example where a pregnant woman was murdered at the front door of her own apartment and the police feel that access to her locked phone could yield vital evidence in finding her killer.

The FLEOA/ALA/NSA filing also references Vance's report when it highlights a conversation between two suspected criminals who were excited about the fact that their iPhone software version meant that the cops wouldn't be able to get into their phones.

"I don't think they can open it," one inmate said over the recorded phone line. "I mean, you know how much shit is on that phone."

Apple's arguments – which have been backed up with some vehemence in the press and by the tech industry – have centered around the fact that they are being asked to break their own security. But law enforcement sees things rather differently.

They are arguing instead: if we let this stand, law enforcement will effectively be cut off from the predominant form of communication of modern times.

When officers are granted search warrants to go into people's houses, it often turns up valuable information about people's movements, their associates, their activities. Or it used to. In 2016, people don't have address books and contact numbers written down. They don't have printed versions of their credit card bills. In many cases, they don't even have receipts of purchases. It is all done electronically and, increasingly, all on a single device – your phone.

The police are basically saying search warrants are going to be useless if there is no way to access a phone without the owner providing access details. And since there is an entire amendment – the Fifth – focused on self-incrimination, it's safe to assume people will simply refuse to tell the cops what their passcode is.

There's another aspect to having access to phones: they can provide breadcrumbs to other evidence. So, while law enforcement can and does subpoena, for example, email providers to supply information on a particular individual, because so much goes through our phones these days, they may not be able to even find out what email address a criminal is using, because it's behind that locked phone.

The same argument being used by privacy advocates and Apple – that the modern smart phone contains so much information that it needs extra protection – can also be used to argue why it is all the more important law enforcement can gain access to it – because it may be the only container of vital evidence.

Law enforcement is genuinely concerned that if it becomes common knowledge that a certain type of phone and a particular app used together are untouchable by the authorities, then almost immediately criminals will move to them, and make their jobs significantly harder.

It's a concern that, regardless of your views on this particular case, everyone needs to take seriously.

This is how the FLEOA/ALA/NSA filing summed it up: "If Apple can refuse lawful court orders to reasonably assist law enforcement, public safety will suffer. Crimes will go unsolved and criminals will go free. Apple's iPhones and iPads are ubiquitous. They are powerful. They are used by criminals, as well as crime victims."

And it notes this is "not a theoretical debate," quoting an example of "one big-city district attorney's office" where roughly half of the mobile devices recovered during investigations are inaccessible because they run iOS 8.

It notes there are 100 inaccessible devices in Harris County, Texas; 30 in Cook County, Chicago; 46 in Connecticut; and so on.

Next page: And then come the legal arguments
Page:
Tips and corrections
93 Comments