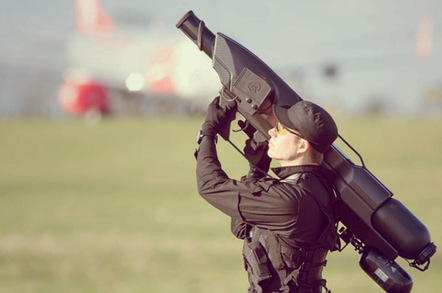 As the world's skies darken with drones, a British firm reckons it's come up with the ultimate solution to the UAV flying menace: the mighty SkyWall100 handheld net-firing cannon.

According to OpenWorks Engineering, SkyWall is "a combination of a compressed gas powered smart launcher and an intelligent programmable projectile", the latter designed to neutralise threats by either simple net entanglement, entanglement plus parachute drone recovery, or entanglement with "ECM jamming".

The 10kg cannon boasts a "Laser-Equipped SmartScope" and onboard computer "to calculate the launch vector and muzzle velocity required to intercept the drone" to a range of 100 metres.

The entertaining SkyWall100 vid shows an operator apparently dressed to engage a Terminator HK-Drone rather than a slightly sad quadcopter, but it does demonstrate that the net capture tech has legs, or perhaps wings.

We contacted OpenWorks Engineering to ask about when SkyWall might be available, and just how much of a hit to the wallet it will deliver. We're awaiting a reply. ®

RoTM Unarmed, but let's be real – it's only a matter of time, isn't it?