Cisco Partner Summit Cisco has announced new Nexus 9000 and 3000 switches with a theme of 25 and 100 gig Ethernet for 10 and 40 gig prices, calling them cloud-scale products. It's also buying cloud app wrangler startup CliQr.

The 9200 and 9300EX switches are the first native 25Gbps-capable switches. The 9500 offers an upgrade to 100Gbps infrastructure within an existing chassis. Cisco says it’s the industry’s first non-blocking wire rate router with 36 ports of 100Gbps in 1U. 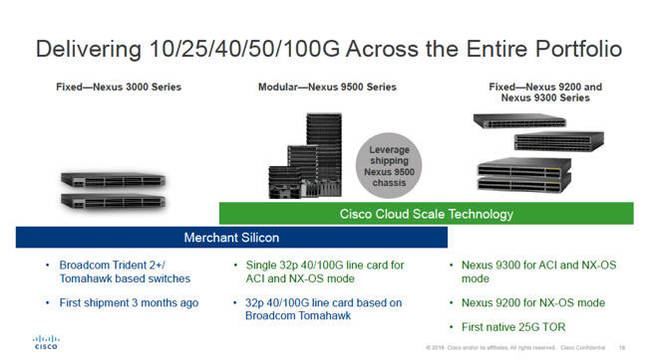 There are intelligent buffers in leaf and spine networking – these are dedicated buffers to ensure lossless storage traffic.

NX-OS, the Nexus operating system, has been updated with segment routing, in-service software upgradability, and microburst detection. This latter is claimed to enable “unparalleled traffic control, operational flexibility and fine-grained visibility and security.”

Cisco claims a network admin can deploy a VXLAN-based fabric in three steps, with zero-touch provisioning. That person could upgrade all fabric switches to a new software release in four mouse clicks.

It’s also added 25/50/100Gbps capability to its top-of-rack 3000 line with a new ASIC, saying this is taking place on its merchant silicon platform.

Cisco intends to acquire CliQr Technologies whose CloudCenter platform provides application-centric orchestration for private, hybrid and public clouds. In other words it can deploy virtual machines on one of multiple clouds and move a deployed VM between clouds. CloudCenter ties business apps to heterogeneous data center infrastructure, running across bare-metal, containers and virtualized environments.

It’s interesting that Oracle has just bought Ravello which supplies technology to enable hypervisors to move between clouds by virtualizing them, and thus encapsulating apps so they can run virtually anywhere.

CliQr was founded in late 2010 by CEO and president Gaurav Manglik and CTO Tenry Fu. They have raised $38.4m in three rounds. Cisco will pay $260m in cash and assumed equity awards, plus retention-based incentives. The acquisition is expected to close in the third quarter of fiscal year 2016, subject to customary closing conditions. ®