Standing desks have no effect on productivity, boffins find 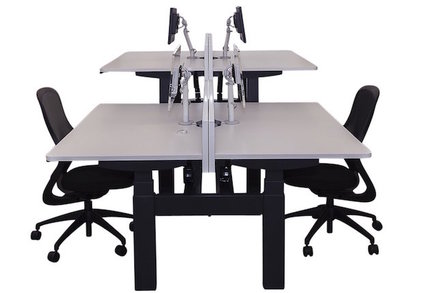 Convertible desks that allow you to sit or stand don't have a measurable impact on productivity, according to a pilot study of 30 call centre workers.

The study, conducted by Sydney University’s School of Public Health at Australian telco Optus and published in the Preventive Medicine Reports explains that its premise was to complement the abundant research suggesting that spending more time standing at work results in several health benefits. The eight researchers write “little is known about the impact of sit-stand desks on actual worker productivity in a real-world setting.”

“This is an evidence gap which needs to be addressed before organizations invest in sit-stand desks as a measure for preventing chronic disease and promoting wellness in their workforce.”

One group of workers was the subject of an “intervention” in the form of a new Zenith Rumba 2 Stage Sit-Stand Workstation depicted at the top of this story (or here for readers on mobile devices. This group was also offered training on how to use the desk “and daily e-mail reminders to stand up more during the workday for the first two weeks after sit-stand desks were installed.”

A control group got to stay at their old desks and weren't nagged by email.

Half of participants were tracked by an accelerometer, the other half by an inclinometer. Other data was recorded by self-reporting.

The research has been published under a Creative Commons licence, so there lots of verbiage and tables to be found here. Long story short, by the end of the 19-week trial those with a sit-stand desk were standing about 90 minutes a day and feeling very good about themselves for doing so.

“There were non-significant trends toward more positive work perceptions among the intervention group,” the study reports. Those with sit-stand desks also reported feeling more energetic.

Measurements of productivity, however, showed that standing at work didn't result in more effective workers.

The researchers aren't deterred by that fact, as they reckon no previous research has tried to correlate standing desks and productivity. They therefore regard the study as an early indicator that standing desks aren't going to harm a workplace, while also noting that larger studies in a range of workplaces will be needed to cement their findings. ®