Samsung off the hook as $120m Apple patent verdict tossed

Not the 'rounded corners' verdict, the other stupid one 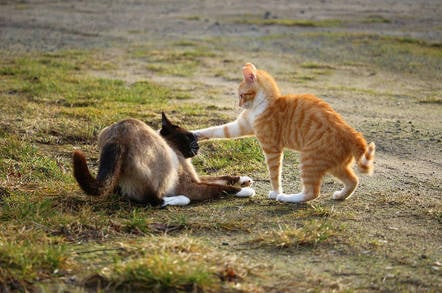 Dramatic recreation of the court battle

A US appeals court has handed Samsung a legal victory in its never-ending patent war with Apple.

The Federal Circuit Court of Appeals on Friday overturned an infringement verdict against Samsung and invalidated two other patent claims made by Apple related to the operation of smartphones.

The court now says that Samsung did not infringe on Apple's US patent 5,946,647 and invalidated Apple patent claims on patents 8,046,721 and 8,074,172, preventing the company from collecting damages.

Additionally, the court upheld a counter-infringement claim Samsung made against Apple for its own patent 6,226,449 and upheld a damage claim of $158,400 to Samsung.

In short, Samsung goes from being down $120m to Apple to getting a $158,000 payout. The monetary decision will barely register for either company, as Samsung made a $5.05bn profit last quarter and Apple reported $18.4bn.

The victory does, however, give Samsung important points in its years-long patent war with Apple. The two sides have been battling it out in courts over multiple accusations of patent infringement between their respective Android and iOS smartphone and tablet lines.

Apple late last year finally claimed victory in an earlier case when Samsung said it would cough up a $548m patent infringement bill to Cupertino, though it is still holding out hope that the US Supreme Court will agree to hear one final appeal in that case. ®