Move over Continuum: No customers yet, but Intel's ready and waiting 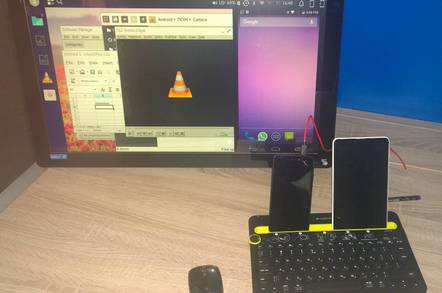 MWC16 Intel is showing what it calls "Big Screen Experience" at Mobile World Congress, an Android smartphone which runs a full Linux desktop when plugged into an external display.

The concept is broadly similar to Microsoft's Continuum for Windows 10 Mobile, but whereas Continuum devices are towards the high end, Intel's project is aimed, it says, at budget smartphones and emerging markets.

On display in Barcelona is a prototype SoFIA (Smart or Feature Phone with Intel Architecture) smartphone with an Atom x3 processor, 2GB RAM and 16GB storage, and modified to support an external display. Attach keyboard, mouse and display, and it becomes desktop Linux, with an option to display the Android screen in a window on the large display.

"Android is based on a Linux kernel, so we're running one kernel, we have an Android stack and a Linux stack, and we're sharing the same context, so the file system is identical. The phone stays fully functional," Intel's Nir Metzer, Path Finding Group Manager, told the Reg.

"I have a multi-window environment. As soon as I plug in I can do spreadsheets, I can drag and drop, play video. Achieving all this on a low-end platform is a challenge," said Metzer.

Currently the display on the device goes blank when the external display is attached, but Metzer said that the next version of the Atom X3 will support dual displays.

The version of Linux used is maintained by Intel. "We need to align between the Linux versions and the Android," said Metzer. "The framework is pre-installed, not an app you can download."

Intel is pitching the idea at phone manufacturers here at Mobile World Congress, but had nothing to report concerning actual customers for its device. "The chip is ready, this is production-ready. This can go into production tomorrow. It is a business decision," said Metzer.®