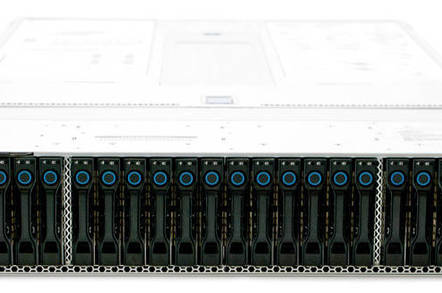 EMC announced its VxRack scale-out storage system in May 2015, with the smaller VSAN-based VxRail coming out yesterday.

The testing software was MySQL Sysbench and virtual machines running in Dell R730 servers sent storage accesses to the VxRack. The test measured VxRack's performance in terms of transactions per second (TPS) and latency as the number of accessing VMs increased.

Chart one looks at TPS:

By 12 VMs it had passed the X-IO machine, and left it behind after 16 VMs.

VxRack has good, to say the least, throughput, with Storage Review using the word "incredible."

Next the testers looked at MySQL latency:

The X-IO ISE 860 measured 29 and 39ms respectively at 4 and 8 VMs. After that it was left behind again. It will be absolutely fascinating to see how an all-flash Nutanix rig copes in the same test, if Nutanix has the cojones to expose its product to Storage Review in an unfettered way. Ditto Simplivity. We understand X-IO has new all-flash product coming by the way. ®