You have won second prize in a beauty contest. Swipe your card to be credited $10 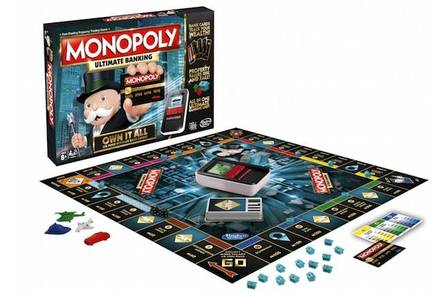 Monopoly’s had a cash-free version since about 2014, when players were offered credit cards that, when inserted into a custom device, credited them with new cash for going around the board or debited money after property transactions.

The new “Monopoly Ultimate Banking” takes things to another level a new breed of “Chance” cards that change economic conditions and mean variables like rents can change. The ATM's the key to such changes as one swipes the Chance card to change variables in the game.

The new version of the game will go on sale later this year, for US$25. There's no word on when the ATM will reach the rest of the world.

Monopoly’s owner, Hasbro, now churns out variants on the game regularly as it seeks to milk the franchise for all it is worth. The company is also fighting off newer and less-nasty games: your correspondent finds that Settlers of Catan keeps all the players involved – and with a chance of winning – deep into an afternoon of dice-rolling, nearly always without tears and tantrums. ®