Cricket can get nasty: India v Pakistan rivalry boils over into cyber-war

Cheer at Test results, find yourself hit by SQL injection 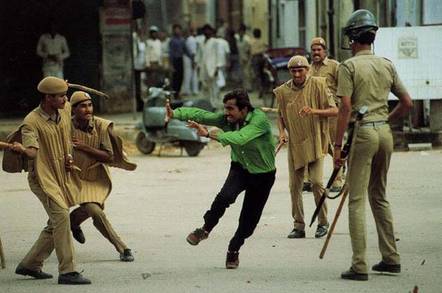 The continuing rivalry between India and Pakistan has spilled over into cyberspace, with activity peaking around nationalist holidays and sports fixtures.

“India and Pakistan’s independence days, which fall on August 15 and August 14 respectively, create a predictable pattern (at least over the past three years) of attacks and retaliatory strikes by the opposing hacker groups,” Recorded Future reports. Hacktivists have also been known to take up arms because of passions ignited by cricket, it adds.

On March 2, 2014, Pakistan defeated India in a cricket match in the Asia Cup held in Dhaka, Bangladesh. The next day (March 3), in Meerut, India, 67 Kashmiri students at Swami Vivekanand Subharti University were suspended for having cheered for Pakistan and distributing sweets after their win.

Then on March 5, 2014, the website of Swami Vivekanand Subharti University was hacked by a group claiming to be the Pakistan Cyber Army (AKA Bangladesh Cyber Army) in response to expelling pro-Pakistan students.

Finally, on March 7, 2014 the sedition charges against expelled students are dropped but they could still face prosecution over the incident.

Hacktivists from the Pakistan Cyber Army (PCA) have targeted India since 2007. Government and private sites targeted by the PCA at various times have included the Indian Oil and Natural Gas Corporation, Indian Railways, the Central Bureau of Investigation, Central Bank of India, and the State Government of Kerala. Recorded Future has republished Facebook posts seemingly by member of the PCA that provide tutorials on how to set up phishing attacks.

Individuals affiliated with the PCA may have skills including zero-day vulnerabilities, SQL injection, WEP cracking, and spear phishing, according to reports by Recorded Future and other threat intel experts, including ThreatConnect and FireEye.

“There [are] many possible motivations and objectives of the cyber activities between India and Pakistan,” Recorded Future concludes. “These could range all the way from loosely affiliated hacktivist groups avenging attacks by defacing symbols and institutions to more coordinated state-sponsored attacks.”

The threat analyst firm plans to look closer into state sponsored hacking in the sub-continent in a follow-up study. ®