Health and Safety to prosecute over squashed Harrison Ford 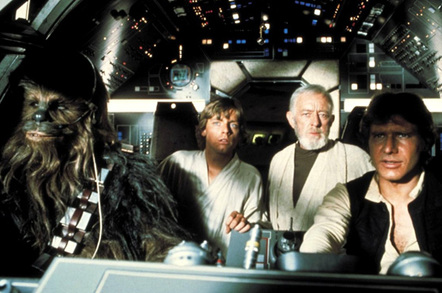 The UK's Health and Safety Executive (HSE) has announced it will prosecute the company allegedly responsible for squashing Harrison Ford during filming of Star Wars: The Forces Awakens.

Ford suffered "a broken leg and other injuries when he was struck by a heavy hydraulic metal door on the set of the Millennium Falcon" at Pinewood Studios back in 2014.

Foodles Production (UK) Ltd - "the company responsible for producing Star Wars VII: The Force Awakens" - will appear at High Wycombe Magistrates Court on 12 May for "four alleged breaches of health and safety law".*

An HSE spokesman said: "By law, employers must take reasonable steps to protect workers – this is as true on a film set as a factory floor. We have investigated thoroughly and believe that we have sufficient evidence to bring the case to court."

The Health and Safety Executive is regularly a target of scorn on this side of the Pond, for real or imagined nanny state outrages against common sense. Accordingly, it's been obliged to indulge in some myth-busting to assure citizens that, for example, a report insisting "refuse collection workers in Colchester have been banned from wearing Christmas hats or anything Christmassy on the grounds of health and safety" was actually entirely groundless.

Similarly, the executive categorically denies that burger vans operatives are not allowed to cut burgers in half on health and safety grounds. ®

*The alleged breaches are:

'We shall double our efforts,' gasp worried Dixons staff

Vulture at the Wheel Crossover2 jack of all trades

I feel a great disturbance in the Church