A discovery to make Einstein proud 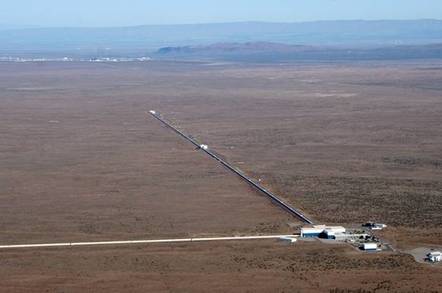 One of the LIGO instruments causing all the fuss

Analysis A 15-year experiment using some of the most advanced technology known to Man has picked up the first detection of a gravitational wave, the first direct measurement of black holes, and the first direct evidence of binary black holes. It has also opened up an entirely new field of astronomy.

The signal was picked up on September 14, 2015, at 0950 UTC by the two Laser Interferometer Gravitational-wave Observatory (LIGO) detectors built for the purpose in Livingston, Louisiana, and Hanford, Washington, in the US. The team then spent four months checking and rechecking the data before publishing in the Physical Review Letters today.

"Our observation of gravitational waves accomplishes an ambitious goal set out over five decades ago to directly detect this elusive phenomenon and better understand the universe, and, fittingly, fulfills Einstein's legacy on the 100th anniversary of his general theory of relativity," said Caltech's David Reitze, executive director of the LIGO Laboratory.

Einstein first predicted gravitational waves in 1915, although he changed his mind about them several times in the following years. He proposed that the spacetime fabric of the universe would be warped by large masses, and if they interact with each other the masses can push out energy in the form of gravitational waves that propagate out at the speed of light.

Einstein acknowledged that these waves would be so fantastically small that they would be impossible to detect, but engineering has moved on in the last century. For the past 50 years, scientists have been trying to pick them up using the then-state-of-the-art machinery of their times.

There have been numerous false starts and reported signals that couldn't be replicated. Most recently, in March 2014 the BICEP2 (Background Imaging of Cosmic Extragalactic Polarization) team claimed success, only to find out that cosmic dust had interfered with its readings. But today's announcement looks much more solid, thanks to the work that went into it.

After a fierce fight, they sold the National Academy of Sciences on the idea and got funding to build the first LIGO detectors, which they admitted at the time were probably not going to work. It took 20 years and over half a billion dollars to get the twin sites set up and ready to roll.

The LIGO system consists of two 2.5-mile (4-km) tunnels set at right angles with a laser at one end. The laser shoots light towards a mirror that splits the beam down the tunnels, whereupon it is reflected back and directed to a detector. If spacetime ripples pass though the instrument, the mirrors at the end of the tunnels move and the detector would pick up interference in the laser signal.

To get rid of interference, the tunnels are pumped out to produce a vacuum and the mirrors are polished to a higher degree of accuracy than has ever been achieved before. Even the tunnels themselves are balanced to account for the curvature of the planet and make sure the signal is pure.

The initial LIGO run lasted from 2001 to 2010 and the vast majority of this time was spent building up the computer controls that eliminate background interference. Initially, everything from earthquakes to nearby traffic noise affected the signal, but slowly the returns were cleaned up.

In 2010 the instrument was refitted with the latest hardware, which increased its sensitivity further. LIGO was four days short of being officially open for business when it detected the signal in September. The two observatories, nearly 2,000 miles apart, both picked up the same signal within milliseconds of each other, as you'd expect with a signal traveling at the speed of light.

To give you some idea of how sensitive this signal is, the gravitational wave deflected the laser by a ten-thousandth the diameter of a proton. Yet from that sign the team has been able to deduce what caused the spacetime ripple.

LISA Pathfinder's watch is over, but busting it can teach us to handle future, nastier, missions

Close-pair binary and their mate