Inside the surreal world of US-EU trade treaties 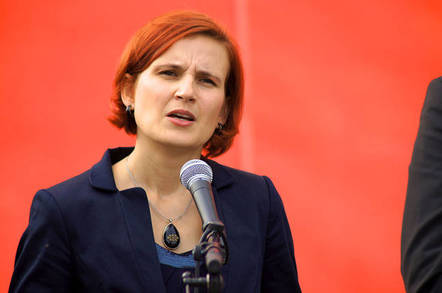 A German MP has given an insight into the surreal restrictions imposed around the upcoming US-EU trade deal, the Transatlantic Trade and Investment Partnership (TTIP).

Katja Kipping has written a personal account of her visit to a special reading room at the German Ministry of Economics that was set up after Parliamentarians fought and won the right to see the text being negotiated on their behalf by bureaucrats.

In it, she describes the extraordinary lengths that the German government has gone to in order to prevent any useful information on the trade deal being made public.

First, Kipping was required to book the room for a given period and was allowed only two hours to review the 300+ pages of the current deal (or 25 seconds per page).

Then she was only permitted to enter the specific room at the Economic Ministry by herself. She was required to leave her jacket, her bag and her phone outside the room so she was not able to take notes or otherwise record or picture the text.

That text was made available on one of a number of computers in the rooms. She was assigned a specific computer which did not have an internet connection. Before being allowed to sit down in front of the terminal, however, she was required to sign up to the "visitors' rules" – one of which is that she is not allowed to discuss the content of anything that she has seen.

One of the phrases on the document she was required to agree to in order to view the draft text read:

You recognise and accept that in being granted access to the TTIP texts you are being extended an exceptional degree of trust.

As a democratically elected member of parliament, Kipping took particular offense. "I'd always thought that elected MPs have a right to information," she wrote. "Yet the TTIP negotiators (and who gave them their legitimacy?) reckon they are GRANTING us access out of the goodness of their hearts. Access as a sign of exceptional trust. Whoever wrote that – did they really think that we MPs would feel flattered? To me it smacks more of totalitarianism. 'Granting access' and 'extending trust' is not the language you use if you really believe in democracy."

As for the text itself, it was provided only in English, and like most trade deals was largely written in legalese – which can be incredibly difficult to decipher if you are not well versed in international trade law.

Despite all of these restrictions, Kipping still wasn't granted access to the full text. She was informed in the instructions on using the room that the deal's terms and conditions would not be made available as they had already been agreed – despite the TTIP still being under negotiation.

Unsurprisingly, none of this enamored the German MP to the deal but perhaps more importantly, after her two hours reading the text, she came away certain that her criticisms of the deal had been correct.

She wrote: "The two hours I had in the reading room were obviously not enough to read all the documents. Yet afterwards I realised that nothing I had read would make me rethink any of my previous criticisms of TTIP.

"I read nothing to alleviate my concern that the US side wishes to make life more difficult for public and community enterprises and to secure better terms for transnational corporations in the battle for public tenders.

"I also read nothing to calm my fears that EU negotiators are prepared to sacrifice our social and environmental standards for the prospect of winning lucrative contracts for big European firms.

One last, remarkable observation she made was that the document was crawling with typos, such as "teh" instead of "the" and extras "d"s on the end of "and"s. Such is the level of paranoia and security surrounding the deal – which when enacted will impact millions of people – that Kipping hypothesizes that the typos are a form of security, introduced deliberately and specifically for each reader so that if the text does leak it can be tracked back to whoever viewed that version.

Similar restrictions also exist in the United States, with Congressmen and women allowed access to the text only in a windowless, soundproof basement room in the Capitol. Legislators are also required to leave their mobile phones outside and are not allowed to take any notes they may make outside of the room.

The whole experience, rather than setting her mind at ease, has just made Kipping all the more suspicious about what is being negotiated.

"Anyone who was going into these negotiations to enhance environmental protection, consumer protection and labor standards would have nothing to fear from transparency," she notes. "Anyone who's engaged in selling out democracy, on the other hand, is obviously going to want to avoid public scrutiny. If Sigmar Gabriel and the negotiators are really so convinced of the benefits of TTIP, why don't they just make the text available to everyone online?"

As for the TTIP itself, the 12th round of negotiations will be held later this month in Brussels, with further meetings planned in April and July. The hope is for the agreement to be largely agreed by the summer, although the Obama Administration recently accepted that it was probable that the deal will not be signed before the current president leaves office in November.

You can read Kipping's post in German on the Left Party's website, or an English-translated version at War on Want. ®

UK.gov isn't ready for no-deal Brexit – and 'secrecy' means businesses won't be either

7 months not enough time for firms to prep

Apple's 'KGB level of secrecy' harms its AI projects – but don't worry, it's started a blog