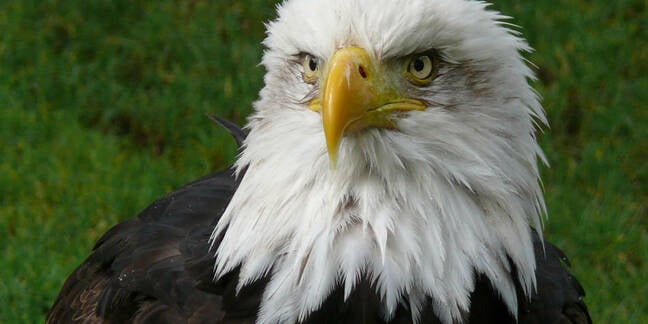 The Metropolitan Police have confirmed they're looking into deploying drone-busting eagles, a few days after a Scottish MP called for cops north of the border to investigate the possibility of using feathered interceptors to deal with growing flocks of wild UAVs.

According to the Times, Met Commissioner Sir Bernard Hogan-Howe has tasked a chief inspector with seeing if a Dutch talon-armed anti-UAV initiative might work in the UK's capital.

The Netherlands' finest recently released a video showing how a trained eagle could safely tackle a moderately-sized quadcopter. Spokesman Marc Wiebes explained: "The bird sees the drone as prey and takes it to a safe place, a place where there are no other birds or people."

A Metropolitan Police spokesman said yesterday: "As would be expected in an organisation that is transforming we take an interest in all innovative new ideas and will of course be looking at the work of the Dutch police use of eagles."

Last week, Dunfermline and West MP Douglas Chapman, who sits on the Commons Defence Select Committee, suggested Police Scotland similarly mull an eagle squadron to clear the skies of drones that he described as "a real risk to people", "a danger to those on the ground" and even "a risk to national security" in the wrong hands. ®