The folks at Eurocom have released another monster 'mobile workstation' 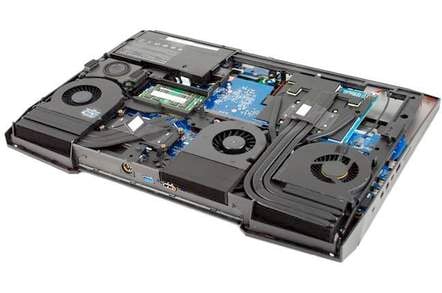 When Eurocom releases new laptops – or 'mobile workstations' as it prefers to call them – it can be hard to keep one's jaw from the floor.

This time around the company's released the Sky X9W complete with a quad-core, eight-thread, Intel Core i7 6700K capable of operating at 4.2GHz and nestled amidst an Intel Z170 Express (Skylake) chipset. The NVIDIA Quadro M5000M dwarfs the CPU for core count: it's got 1,536 of its own.

This time around, Eurocom says the machine has a battery, which is a bit of a disappointment because it had previously labelled the portable power source an “uninterruptible power supply”. The company's also managed to shave 700 grams off previous mobile workstations to weigh in at a mere 4.8 kilograms.

Which is not to say a call to harden up would be fair: there's at least three fans we can see in this machine, a single USB-C port, a pair of mini display ports capable of driving four monitors, an HDMI outlet, five USB 3.0 ports, a pair of RJ45s and Wi-Fi.

Prices start at US$2,930, but the configurator lets you crank that up far higher – just the maximum GPU option we've mentioned above sees the machine hit $4309.

If you don't feel the need for a holiday this decade, or need to take a very grunty machine into the kind of place you don't want to go on holiday, the Sky X9W may be for you! ®