And has a good old moan at his former employees 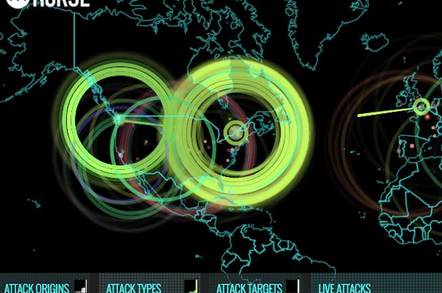 Norse Corp cofounder Sam Glines has hit out at the media after he was fired on Monday as CEO of the threat intelligence company.

In January, The Register broke the news that Norse was laying off a sizable chunk of its workforce. Since then, the biz's website has been up and down, and it appears that its operations are grinding to a halt.

In a statement today, Glines said this was totally due to journalists scaring away Norse's customers and investors.

"Significant deals were being closed and other strategic discussions underway, but as soon as this article/blog was posted, everything quickly began to fall apart," Glines said, referring to reports following up our scoop. "Deals were terminated or paused."

Glines said that the decision to let staff go in January was "one of the most difficult days of my career," but was necessary due to: delays in developing new products; the company failing to meet sales targets for the second half of the year; and delays to series-B financing.

He categorically denied claims that mysterious shell companies were bankrolling Norse. In September, the Silicon Valley biz secured $11.8m in funding from KPMG Capital, and has raised $42m to date from various sources. But this wasn't enough to cover the company's "aggressive monthly burn."

That sorta marries up with what ex-employees have been telling The Reg. Over the past month, we've talked directly to half a dozen ex-employees, and all tell of delays with version two of Norse's threat information tool, and an expansion of the sensor network the firm used to gather the data on the internet. This left the biz relying on VC money to pay its bills, and the money started to dry up.

According to two former techies, the engineering team was working flat out to get the new product out and some staff were promised a significant bonus upon completion. The beta product was ready to go but not released before the January layoffs, and the bonus wasn't forthcoming.

One source told us earlier this week that Norse agreed to stop withholding the bonuses after one of the programmers threatened to sue.

The company's management wasn't well-liked by at least some of its staff: one insider summed up their feelings by pooping on a Christmas card from the CEO, and photographed it for us to marvel. Of course, we took steps to verify that the festive card pictured was legitimately sent by Glines.

It's rare to see such animosity towards a CEO, and all the former employees we talked to complained that Glines was seldom at company headquarters in California, residing instead in St Louis, Missouri, and flying in every so often. It was left to the CTO Tommy Stiansen to keep everyone motivated.

The sales teams at Norse also came in for frequent criticism. Norse appears to have burned through multiple sales teams, which, in one source's words, sold product capabilities that Norse simply didn't have in place yet. They also drastically underestimated how long it would take to close deals.

The January layoffs created a lot of bitterness, and don't appear to have been handled well. Staff who were staying were advised to meet at a hotel, whereas those called to meetings in the company building were let go, including one staffer who had started work at the company a couple of hours ago that day.

"A lot of people have been hurt. And, in addition to demonstrating how today's media can be manipulated by persons to suit their purposes or personal vendettas and how facts can be misrepresented to lead an entire industry astray; the events of this week also show how much power a disgruntled employee can wield on an employer," Glines said.

Former staff can have power, but if Norse was on a strong financial footing then such stories would have had little effect. What seems to have done the company in is its high cash-burn rate, low sales, and an over-reliance on getting funding in to cover debts without building a proper cash flow.

Norse isn't the first company to fall into this trap, and it won't be the last. Venture capital in Silicon Valley and elsewhere is drying up as investors get nervous about the deteriorating state of world markets, and a lot of startups are going to be in serious trouble if they don't get profitable soon. ®

Google rushes in where Akamai fears to tread, shields Krebs after world's-worst DDoS

Internet of Amazingly Insecure Tat? That's the one