German Chancellor fires hydrogen plasma with the push of a button

Fusion reactor fires up after 10 years of construction 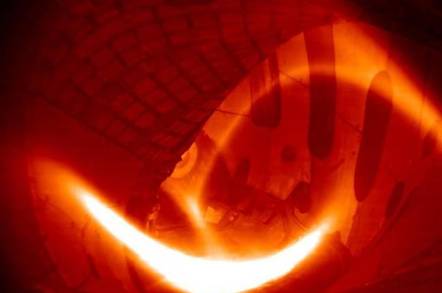 Pics and video Angela Merkel has witnessed the first hydrogen plasma being created by the Wendelstein 7-X fusion reactor experiment as part of Germany's push to take the lead in future power generation.

Chancellor Mutti, as the ex-research scientist is known by the German electorate, fired up the device – which then fired a two-megawatt pulse of microwave heating at a small amount of hydrogen, turning it into plasma. If all goes to plan the device will be enhanced to produce 20 megawatt pulses capable of sustaining plasma for up to 30 minutes.

"With a temperature of 80 million degrees and a lifetime of a quarter of a second, the device's first hydrogen plasma has completely lived up to our expectations," said Dr. Hans-Stephan Bosch from the Max Planck Institute, which operates the device.

The Wendelstein 7-X has created 300 batches of six-million-degree helium plasma for the last two months, primarily because this performs the useful task of burning up any dust and impurities that were left in the device after its construction. Now the boffins are moving on to hydrogen.

Most fusion chambers follow a Soviet-designed tokamak design, a doughnut-shaped device that uses strong electrical current to hold the plasma in place. But Wendelstein 7-X is a stellarator, developed initially in the US, which uses magnetic coils to keep the plasma from burning its way out of the reaction chamber.

The stellarator design does have an advantage over tokamaks, in that it can operate continuously, whereas the alternative design can only operate in pulses without auxiliary equipment. The Wendelstein 7-X is the largest stellarator in the world and has cost Germany €370m ($410m) so far.

The machine uses a ring of 50 superconducting coils, some 3.5 metres (11.5 feet) high, capable of holding 30 cubic meters (1060 cubic feet) of ultra-thin plasma in place. While it's not capable of producing fusion power itself, the design is a test case to show that a stellarator could be used in future fusion projects. ®