Web giant snaffles 300k CPUs a quarter – how many could be ARMv8-As? 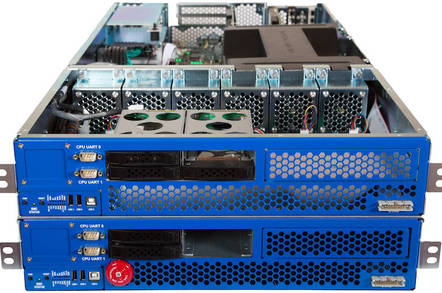 Google is reportedly about to give a conditional thumbs up to Qualcomm's 64-bit ARM chips for servers.

ARM cores are used in countless smartphones, tablets, gadgets, toys, hard drives, smartcards, networking gear, and so on, where electrical power is a premium and workloads are relatively light. Think small but nippy. Over in the data center – where Intel's beefy x86 chips rule supreme – it's a vastly different story: buckets of performance for lots and lots of watts to handle demanding workloads.

There is, though, the argument that the 64-bit ARM architecture could find a home in server warehouses: in densely packed racks running lots of light threads using RAM and network interfaces coupled closely to the cores, which may be ideal for web servers and apps.

Last month, Qualcomm – which mainly designs radio modem chipsets and ARM system-on-chips for smartphones – said it was about a year away from shipping server-grade processors at volume, although prototype parts are being sampled now by unnamed hyper-scale cloud providers in North America and China.

Now we know the identity of at least one of those hyper-scale cloud providers, and it's not that hard to guess: Google. The Mountain View-based web giant is said to be helping Qualcomm design its server-class ARMv8-a CPU, and will commit to using the silicon if its performance is good enough. That's according to a report by Jack Clark, formerly of these pastures, and Ian King at Bloomberg.

Google orders 300,000 processors a quarter for its acres of servers, and Qualcomm will want to catch a piece of that action. We can imagine Facebook, Baidu and Amazon AWS all sampling Qualcomm's wares at some level over the coming months, along with AMD's 64-bit ARM offering: the Opteron A1100 aka Seattle.

Today's news may come as a nasty blow to AMD: Seattle, which was two years in the making, is powered by eight ARM Cortex-A57 cores, whereas the ARM world today is gearing up to use the superior A72. Qualcomm is using its own ARMv8-compatible microarchitecture in its server chipset.

A senior AMD x86 engineer told your humble hack early last year that Qualcomm was 10 years away from designing a decent data center-class processor. It may be sooner than that.

Meanwhile, Intel's x86 architecture accounts for 99 per cent of data center CPUs, and has the Xeon D family of chips ready and loaded to counter any incursion by the ARM architecture. ARMv8 has a long way to climb.

Ironically, Intel is hoping to get its radio modem technology into next-generation iPhones and other smartphones, edging Qualcomm out of that market while the latter is trying to slip into Intel's kingdom.

Spokespeople for Qualcomm and Google told The Register this morning in San Francisco: "We don't comment on rumor and speculation." AMD was not available for immediate comment. ®