Einstein not so smart, wide open to old-days as well as zero-days 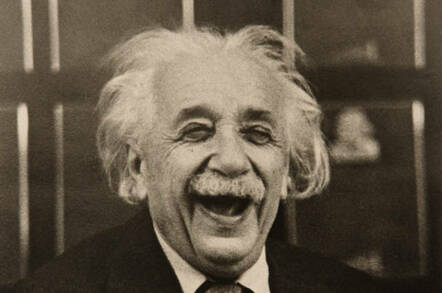 The US government's firewall, named Einstein, is not as smart as its name would suggest.

A report [PDF] by the General Accounting Office (GAO) into the National Cybersecurity Protection System (NCPS) has concluded that it is only "partially meeting its stated system objectives." Which is a polite way of saying it sucks.

Among the extraordinary pieces of information to emerge are the fact that the system – which has cost $5.7bn to develop – does not monitor web traffic for malicious content, just email. It can't uncover malware on a system and it doesn't monitor cloud services either.

The system also carries out only signature-based threat assessment and intrusion detection i.e. it's a dumb terminal waiting to be told what to find rather than looking for unusual activity. And that means it is wide open to zero-day attacks.

If that wasn't enough, the department behind the system – the Department of Homeland Security (DHS) – hasn't included anything to measure the system's own performance so it doesn't even know if it's doing a good job or not. And it is failing to ask for or share information with other agencies, effectively making it blind.

It is hardly surprising then that the uptake of Einstein has not exactly been stellar. The report notes that federal agencies have adopted the NCPS "to varying degrees."

There are 23 agencies that are actually required to implement the system but the GAO found that while those agencies were routing "some" traffic to the system, only five of them were using the system to deal with possible intrusions.

"This occurred in part because DHS has not provided network routing guidance to agencies," the report notes. "As a result, DHS has limited assurance regarding the effectiveness of the system."

Which is a roundabout way of saying that sysadmins want nothing to do with it.

Einstein was created in 2003 for intrusion detection. The idea was that it would automatically collect and analyze federal agencies' network traffic. In 2009, a second version was deployed that added signatures (digital fingerprints of known viruses and exploit code) to the system and put emitted alerts if malicious activity was discovered. And then in 2013, it was updated again to block malicious traffic from either entering or leaving network, using indicators developed by the DHS.

Despite having spent $1.2bn in 2014 and $5.7bn in total, however, the system still only monitors certain types of network packets – and that does not include web traffic or cloud services.

It doesn't include anomaly based and stateful purpose detection methods – which are commonplace in most halfway decent intrusion detection systems – so the system can only recognize threats that have already been identified and added to the database.

The system has 228 sensors to pick up information across the .gov network, the report reveals, and has over 9,000 signatures in its systems, although only 2,300 are currently enabled, the majority of which come from commercially available products.

The GAO was clearly unimpressed with this approach and asked the DHS to explain why its system was so unsophisticated. The response was classic bureaucracy: "According to DHS documentation and NSD officials, NCPS was always intended to be a signature-based intrusion detection system, and thus it does not have the ability to employ multiple intrusion detection methodologies."

Even better, despite spending millions to protect US government networks, the DHS reckons it's not its job to protect US government networks. Officials told the GAO: "It is the responsibility of each agency to ensure their networks and information systems are secure while it is the responsibility of DHS to provide a baseline set of protections and government-wide situational awareness, as part of a defense-in-depth information security strategy."

How bad is it in reality? The GAO tested the system by trying to exploit 489 known vulnerabilities in Adobe Acrobat, Flash, Internet Explorer, Java and Microsoft Office. Of them, just 29, or six per cent, were picked up by the scanners and stopped – allowing the rest to reach potentially vulnerable devices. So, six per cent coverage of known security holes for $6bn. Money well spent. ®