Why schlep data cross-country when we live on the coast, near free cooling? 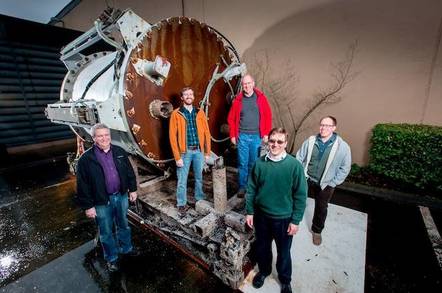 Microsoft has revealed that it's trialled an underwater data centre.

Project Natick saw Redmond sink a capsule about a mile offshore from Seattle, an approach felt to have potential because about half of humanity lives on or near coastlines. Microsoft's thinking is that it's a good idea to put data centres near their users, rather than taking data on latency-inducing cross-country journeys. Throw in the fact that immersion in water is a handy way to get temperatures down and the idea was felt to have merit by Microsoft leadership.

The company therefore constructed the capsule depicted above (here for readers on mobile devices, placed a single rack of servers inside, filled it with pressurised nitrogen, clamped heat exchangers to the hull, connected it to the Net and powered it up. The capsule, dubbed “Leona Philpot” after a Halo character, was then sunk near the California town of San Luis Obispo and chugged away doing actual work for over 100 days, at a depth of 30 feet.

Once retrieved, the capsule was in rude health, having lasted longer than expected and even giving a few barnacles a home.

This experiment was powered from terra firma. In future, Microsoft imagines it might be possible to power sunken data centres with wave energy. Trials are planned near existing wave energy generation trials. Redmond's plans now call for such data centres to have a five-year working life, as that matches that lifespan of servers in its cloud. The capsules are hoped to survive twenty years.

Cooling is one of the big big contributors to data centre operating costs, so anything that cools kit without the need for an extra input is welcome. El Reg also notes that many large cities already have good locations for such data centres, because submarine cable landing sites are generally protected zones into which shipping is not permitted and fisherfolk are prevented from doing much more than throwing over a single hook. Submarine cables are also well-armoured when close to shore, perhaps representing a good conduit for power. If cable operators allow Redmond anywhere near their precious assets. If not, Microsoft has a whole bunch of regulation to arrange to make this idea float.

Let's also consider that a densely-packed server rack can demand peak loads of 20kw or more. A location with enough wave energy to supply that much juice reliably might not be the best place to locate a data centre. If Microsoft can use waves to send the energy it needs into the grid, well and good. But the idea of co-located generation for a sunken data centre substantial enough to make a difference to a city’s citizens sounds a little optimistic.

Redmond's also not revealed costs. Nor has it explained the state of the servers once they were hauled up. As anyone who deals in matters maritime learns quickly, things left in the sea for a long time don't do well, even when sealed into tubes.

Which is not to say Microsoft's idea is foolish, but there's clearly a long way to go before we get from an impressive experiment to underwater operations. And while that work goes on, terrestrial data centres will also be improving their already impressive power usage effectiveness ratios while content delivery networks and myriad other technologies improve the delivery of content to users without the need for underwater data centres. Or the PR splashes this one's generated. ®