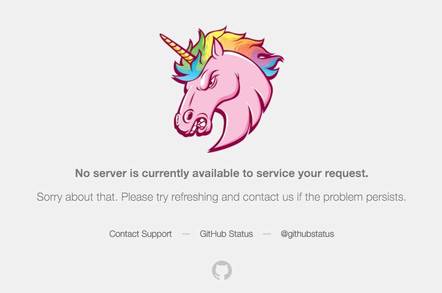 Since 1632 PT (0032 UTC, 1132 AEDT), the website has been down. Right now, the San Francisco-headquartered upstart reports: "We're investigating a significant network disruption affecting all github.com services."

The billion-dollar unicorn's app servers are all unavailable. That pretty much locks out a big wedge of open-source project developers from their Git-controlled source code as well as organizations relying on the 'Hub's private repository hosting.

Not much more to say at this point except post some jokes from Twitter. We'll update this story shortly with more news. ®

"We're working to address a widespread issue affecting all github.com services," the team assures us.

It appears to be working again after two hours of downtime. "The site is recovering. We're continuing to monitor the situation," the Silicon Valley darling added.

1. looks up decentralized git workflow tools to use while github is down 2. finds https://t.co/vQS2MK3Tau 3. oh wait

Sounds better than “We are sitting around saying fuck a lot” https://t.co/h4k03eOvl1

GitHub is busy upgrading NSA backdoors. We'll be back in just a bit.

@TheRegister @github What code has upset China this time?

The cool thing about working on OSS is when GH goes down its like a free holiday How do those suits feel now :P

UK.gov should spend more on AI, bleat VCs and consultants. Oh? Why's that then?

Comment That's right, AI report was written by people with skin in the game

We can't throw money at nerds if they can't get here, wail Silicon Valley's sugar daddies

VCs to Trump: You know what would really make America great? Tax breaks for VCs

VCs to Trump: Don't lock out our meal tickets! Save startup visas!