You hadn't forgotten about Datrium, right? 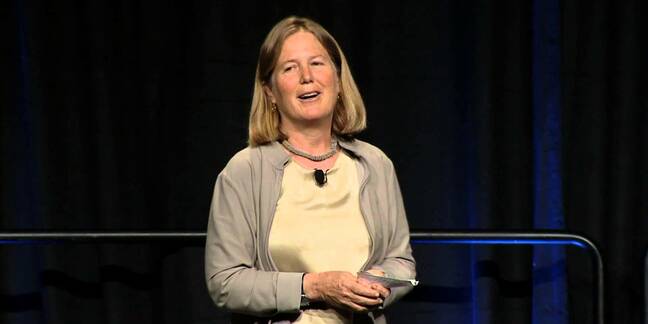 Diane Greene's storage startup Datrium is making its initial DVX product available, saying it is the first server-powered storage system which is not a hyper-converged appliance or virtual SAN.

What does that mean? The big problem with dual-controller storage arrays is that their performance goes down as the number of hosts accessing them goes up. This issue is exacerbated by a fixed network pipe to the arrays, meaning bandwidth runs out at a certain point. And insult is added to injury by having to pay high prices for any flash that goes into the array, even though it is typically made from commodity-based SSDs.

The Datrium founders come from having experience with Data Domain and its deduplication, and VMware with its server virtualization.

Their idea is to disaggregate a storage array in two ways. Firstly, its controller software sits on multi-core accessing servers running Vmware's ESX. Secondly, put fast-access flash-held data into the accessing server's own direct-attached flash in either SSD or PCIe card form.

We end up with the DVX Hypervisor running array controller software across up to 32 accessing servers (hosts), each with its own local read cache for its own, local VMs and the applications inside them. These hosts access a 2U DVX D12x4 Netshelf appliance durably holding the written data in 12 x 4TB, 7,200rpm nearline disk drives.

Inside the Netshelf are two high-availability controllers and mirrored NVRAM. It is more than a JBOD because of the two controllers, the NVRAM and operating software working on proprietary API access from the accessing server hosts. This appliance has no single point of failure. If a host or hosts fail, there is no need for a data rebuild.

There is a 10GbitE link between the server hosts and the Netshelf box.

The end-to-end host and Netshelf software is called DiESL and it supports 2 to 10 cores, with its default usage being 20 per cent of the available cores.

The host software provides in-line deduplication and compression plus data services such as RAID, vDisk clones and VM-centric management, via a vCenter plug-in. This server software is stateless. It also runs on the ESXi kernel and not inside it. DVX Hypervisor operations and reads are local to the host the software is running on. 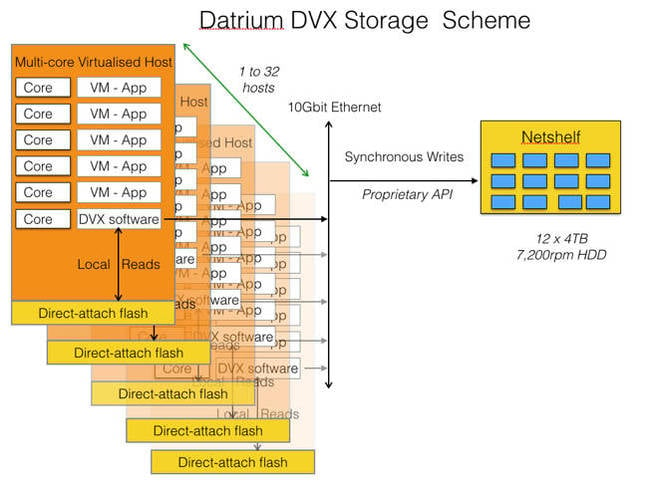 The accessing host servers can have 800GB to 8TB of raw PCIe or SATA flash capacity.

The prime advantage of Datrium's scheme is that storage performance and capacity are decoupled and can progress separately. Every time a new host is added, it provides read access to its own cached data and sends writes to the Netshelf. There can be up to 32 hosts and so read access is not penalized by having to be mediated through a dual-controller set-up, and nor is it hampered by inter-host traffic looking for data to be read that is not on the local host.

There can only be a single Netshelf, for now. Datrium has a general intention of being able to add more Netshelves at some time in the future. It points out that, with the inline data reduction, the 48TB raw capacity, which is 30TB usable, becomes 60 – 180TB in effective capacity.

Microsoft to make Ubuntu a first-class guest under Hyper-V

And loads up the migration cannon to aim at VMware

Version 3.0 scales up, shows some container love and promises validation