Davos 2016: It's now all about technology, but what actually happened? 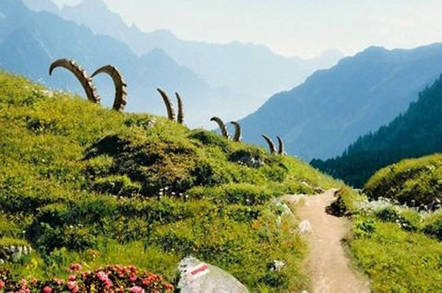 Sketch It used to be that the annual meeting of the World Economic Forum (WEF) in the Swiss ski resort of Davos was all about finance and politics.

But since it turned out that the bankers were almost exactly as corrupt and incompetent as the small cadre of protesters that stood in the snow every year insisted they were, finance has taken a back seat to tech.

So much so in fact that the "official theme" of this year's meeting was the "Fourth Industrial Revolution" – a term that WEF chair Klaus Schwab is desperate to promote and associate himself with.

What does it mean? Well, according to Schwab it is about the mass unemployment that will brought about by our future robot masters.

If that's not enough stimulus for the tech egos in this tiny, over-priced town, what could be?

Maybe noted financier/politician/technologist Leonardo DiCaprio, who appeared on stage and pledged $15m for environment grants while complaining about oil companies. "Enough is enough," he told members of the mega-rich assembly, who were too busy asking each other: "Have you seen Revenant yet?"

Another movie star, Kevin Spacey, was also there, trying to find someone rich enough to bail out Relativity Studios (of which he has just become chairman) in an effort to prevent his House of Cards series from disappearing into financial dust.

His pitch was all Hollywood but aimed at Northern California: "In the next few years Silicon Valley is going to much more involved in content. I would not be surprised if a big tech company would buy a studio," he told reporters. Hint, hint, nudge, nudge.

More of the same

Not that neither Microsoft's Satya Nadella nor Facebook's Sheryl Sandberg were listening. They were too busy being feted on a main panel for regurgitating the same things that every tech CEO has said since the dawn of time.

Don't be afraid of the robots, they both said to a cowering Schwab, hiding behind his pile of autographed books on the subject; we're optimistic about the possibilities that technology brings.

"While we have major issues that we need to address in terms of jobs, we also have the possibility of job creation that is even larger," said either Sandberg or Nadella.

As an example of this empathetic, beautiful Brave New World, Sandberg then used the example of a three-year-old refugee who drowned on a Turkish beach.

"It would be nice if we could all have all those human connections in person, but most people will not be able to connect with a Syrian refugee in person and so the ability to do that with video and pictures is what is going to create that empathy," she enthused, while failing to note that despite all the millions of "Likes" on pictures of a dead kid with heart-rendering messages typed on top, he was still dead.

And in case you were wondering why Davos even exists, it is precisely in that exchange. Davos is for the people that run the world's companies, financial institutions and political establishments to say the same thing they've been saying to bored audiences all year, but this time to people they've seen on the telly.

In that sense, Silicon Valley execs turned up to push their case on encryption. Namely: that they want it without a big government-sized hole in the middle.

The fact is that governments have been placing increasing pressure on tech companies to give them the information they have – just take a look at the ever-increasing number of requests that Google, Facebook, Apple et al put out in their "transparency reports".

On this point, there was an interesting split between the long-term attendees of Davos and the new kids of the block.

The epitome of old power, AT&T CEO Randall Stephenson, doesn't think tech should even express an opinion. "I don’t think it is Silicon Valley’s decision to make about whether encryption is the right thing to do," he said, missing the somewhat obvious point that the data – the tsunami of web traffic – his company has access to is far, far more personal than the other firms that he encourages to shut up.

As for the new kids, the chief scientist of Silent Circle Javier Aguera made the encryption counterargument: "You can do what you want from a policy perspective, but you can’t stop mathematics." Give him another decade of Davos meetings, he'll soon change his tune.

And of course sat right in the middle was Microsoft: an old timer but desperate to be hip with the new kids. Its top-lawyer-turned-president Brad Smith literally talked about being stuck in the middle. "You could be placed in a situation where you have to decide what law to break," he told yet another panel. "It isn’t a comfortable place to be."

Also on the old-timers side was Cisco, and its newly installed CEO Chuck Robbins. He stuck with the tried-and-tested routine of talking about what great technology was coming and how everything was going to be great.

Big data means no more refugees and no more death, he pitched. All this wonderful technology we have at our fingertips, things have never been better. It was classic Davos: utterly devoid of awareness outside its rarefied world.

There was a small sliver of space for the finance industry to enter into, however: its use – or non-use – of new technology in the form of digital currencies. Bitcoin and the like.

The International Monetary Fund scoffed at its size – just $7 billion in digital currency compared to $1.4 trillion in proper money. But, it warned, it may be time to start learning about this digital stuff.

Nonsense, said Citi’s chief economist Willem Buiter in between sips of Dom Perignon: "We know that Bitcoin itself is a complete failure and shows the number one law of programming and software: that anything that can be programmed can be hacked. So nothing is completely secure."

The same came from Morgan Stanley and Deutsche Bank. "I wouldn’t be so worried," said John Cryan, co-CEO of Deutsche Bank, finishing his cigar. "Blockchain technology is interesting. Bitcoin, I don’t think is."

Which of course leads to the question: what are these people on? OK, maybe nothing more than the sweet smell of success, but we do know that the people hired to protect them from the real world outside were.

Twelve Swiss soldiers were sent home for being high on cannabis or cocaine, an army spokesman admitted. You can hardly blame them; it can't be easy standing at the intersection of two wildly different worlds. ®