The next Cuban gristle crisis: US Navy warship powered by beef fat

Blubber-burning battleship is moo-ving with the times 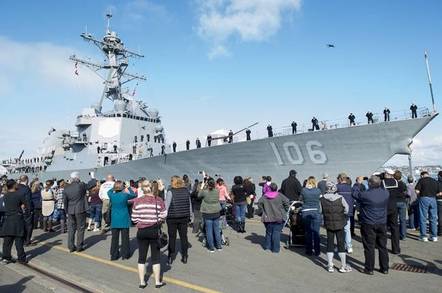 The ship, deployed this week in the USS John C. Stennis Carrier Strike Group, is part of the Navy's Great Green Fleet initiative, which is trying to make swabbies more environmentally friendly by using alternative fuels for power.

"The Navy's use of renewable energy in the Great Green Fleet represents its ability to diversify its energy sources, and also our nation's ability to take what would be a waste product and create homegrown, clean, advanced biofuels to support a variety of transportation needs," said US Secretary of Agriculture Tom Vilsack.

"Today's deployment proves that America is on its way to a secure, clean energy future, where both defense and commercial transportation can be fueled by our own hardworking farmers and ranchers, reduce landfill waste and bring manufacturing jobs back to rural America."

This might sound like environmentalism gone mad but don’t have a cow, man, because there's method to the Navy's madness. The beef fat was purchased from ranchers in the Midwest at competitive rates, Vilsack said, and rendered into fuel by a California company at a cost of $2.05 per gallon.

Under the requirements of the scheme, the fuel must be used by the warship without needing any alteration to the ship's main engines. The bovine biofuel will be rolled out to other craft during the carrier group's deployment. One of the fleet's tankers is carrying over three million gallons of the stuff.

That's not too surprising, since the fuel is in fact only 10 per cent biofuel and 90 per cent petroleum-based. The engine management crew will, most likely, get to sniff the aroma of burning fat, if the biofuel cars on California's roads are anything to go by.

"When it comes to power, my focus has been about one thing and one thing only: better warfighting," said Secretary of the Navy Ray Mabus. "The Great Green Fleet shows how we are transforming our energy use to make us better warfighters, to go farther, stay longer and deliver more firepower. In short, to enable us to provide the global presence that is our mission." ®

Windows for Warships: Time for an upgrade, perhaps

Beyond the Grave: US Navy pays peanuts for Windows XP support