Boffins: There's a ninth planet out there – now we just need to find it 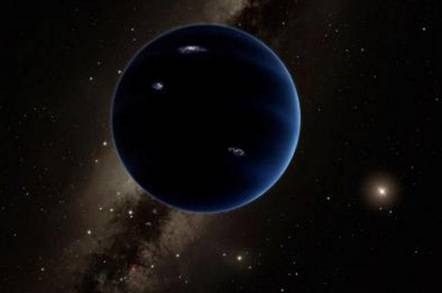 The truth is out there; way, way out there (source: CalTech/R.Hurt)

Pic Scientists at CalTech claim to have found proof that there is a ninth planet in the solar system, using computer modeling and historical astronomy data.

The new planet has a mass about 10 times that of Earth and has a very eccentric path around our Sun, making one complete orbit every 10,000 or 20,000 years and travelling 200 times further from the Sun than our orbit. The planet hasn't been seen, but can be determined to exist based on its effect on objects in the Kuiper Belt that encircles our solar system.

"This would be a real ninth planet," said Mike Brown, the Richard and Barbara Rosenberg Professor of Planetary Astronomy at the California Institute of Technology. "There have only been two true planets discovered since ancient times, and this would be a third. It's a pretty substantial chunk of our solar system that's still out there to be found, which is pretty exciting."

That's true, thanks to our modern definition of what a planet is. We've known about all the planets as far out as Saturn since before telescopes, and the advent of optics led to the discovery of Uranus back in 1781.

There's no fear of that in the case of the new ninth planet – it's massive enough to cause objects in the Kuiper Belt to move in such a predictable fashion that Brown and his associate Konstantin Batygin estimate there's only a 0.07 per cent possibility that they are mistaken about its existence.

In a paper published in the latest issue of The Astronomical Journal, the duo detail how they came to find the planet when a student of Brown's noticed that 13 large objects in the Kuiper Belt were behaving oddly, as though they were being influenced by a much larger body.

Brown and Batygin spent the next 18 months building up complex mathematical simulations of what could be causing the movement and running them through a computer model. Brown supplied the astronomical data and Batygin applied physics to see what could be going on.

"I would bring in some of these observational aspects; he would come back with arguments from theory, and we would push each other. I don't think the discovery would have happened without that back and forth," said Brown. "It was perhaps the most fun year of working on a problem in the solar system that I've ever had."

At first the two considered that maybe other Kuiper Belt objects were causing the orbital anomalies, but the sums didn't add up – the Belt would have had to have 100 times the mass we understand it has. So that left the influence of a planet, and one that was orbiting the Sun at right angles to the orbits of other planets. 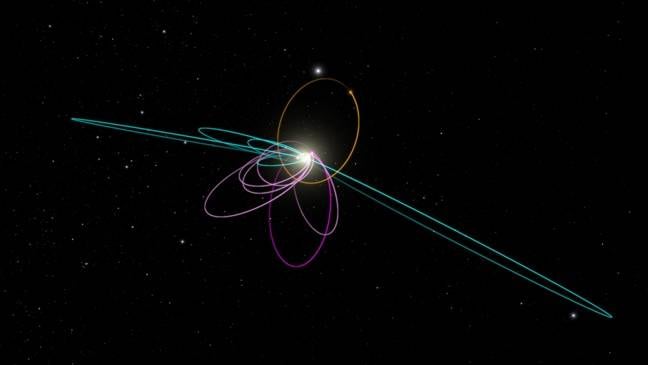 As orbits go it's way out there (source: CalTech/R.Hurt)

"Your natural response is 'This orbital geometry can't be right. This can't be stable over the long term because, after all, this would cause the planet and these objects to meet and eventually collide,'" said Batygin. "Still, I was very skeptical. I had never seen anything like this in celestial mechanics."

In order for the theory to be accurate, there would have to be other Kuiper Belt objects on a similar 90-degree trajectory. After three years of looking, the two found four largish objects that did just that.

"We plotted up the positions of those objects and their orbits, and they matched the simulations exactly," says Brown. "When we found that, my jaw sort of hit the floor."

Planets are supposed to form from the disk of matter that surrounds a young star, but the unusual orbit suggests that while the ninth planet might have started that way, it got knocked out of alignment, possibly by a major object like Jupiter, and sent on a new orbital trajectory.

Despite orbiting so far away from the Sun, planet nine should still be visible using our most powerful telescopes, and may have been picked up on star surveys and not recognized for what it is. The hunt is now on to be the first to get a clear sighting.

"I would love to find it," says Brown. "But I'd also be perfectly happy if someone else found it. That is why we're publishing this paper. We hope that other people are going to get inspired and start searching." ®