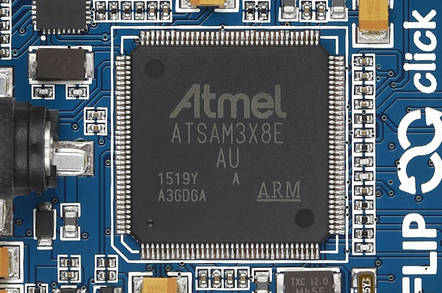 Microcontroller gurus Atmel look set to be acquired by Microchip – and not by the UK's Dialog Semiconductor.

Atmel, a $3.3bn business based in San Jose, California, designs and makes simple and low-power AVR, ARM and 8051-compatible chips for all sorts of electronic gadgets and gizmos. It is probably best known to people as the designer of the processor in Arduino boards, which can be programmed and tinkered with by hobbyists and professionals.

Dialog, based in Reading, England, offered $4.6bn (£3bn) in cash and stocks to buy Atmel in September. Since then, Dialog's share price has dipped, bringing the offer below $4bn.

Earlier this week, Atmel said Microchip – maker of the extremely popular PIC microcontroller family – had made a "superior" offer in December of $3.42bn, again in cash and stocks. Atmel confirmed it was therefore terminating its merger with Dialog, leaving Microchip – an $8.2bn outfit based in Arizona – free to gobble up the AVR kingpin.

"The binding Microchip agreement provides for Microchip's acquisition of all outstanding shares of Atmel common stock at a purchase price of $8.15 per share, consisting of $7.00 in cash and a fraction of a share of Microchip common stock having a value of $1.15," Atmel's board of directors said.

On Thursday, Dialog gave up the chase: "We have concluded that it is not in the best interests of our shareholders to increase the offer price for Atmel," said Dialog CEO Jalal Bagherli.

"We believed the acquisition was the right strategic decision for us, and we are disappointed that it did not come to fruition. However, we remain highly confident in our strategic plan, market opportunities, and competitive strengths. We will continue to put the interests of our customers and shareholders at the forefront of all our decisions. Our focus is to create long-term value for our shareholders."

Dialog will bag a $137m consolation prize from Atmel. ®

PS: Contract chip-maker TSMC published its 2015 financial figures this week. Its net revenue for the full year was NT$843bn ($25bn), up 10.6 per cent on 2014, and pre-tax income was NT$350bn ($10bn), up 16 per cent. About half of its revenue came from manufacturing 28nm and 16/20nm parts. The vast majority of its silicon goes into communications electronics.

Can't quite cram a working AI onto a $1 2KB microcontroller? Just get a PC to do it