A VC with startup agenda slams established suppliers. Surprised? Neither were we 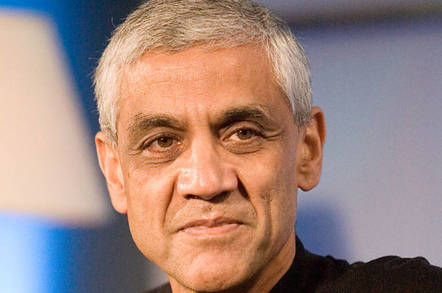 Khosla passed his judgement during an interview at a Structure Conference in San Francisco last month.

The $67bn acquisition of EMC by Dell will set back product development, in Khosla's view, who expanded on the point, claiming major vendors have spent more time engineering financials than designing wondrous tech.

He thinks 80 to 90 per cent of tech innovation will now come from startups and the established vendors will end up partner to those fledgling businesses.

A rebuttal to Khosla's view was made by EMC CTO and SVP John Roese, and it can be read in a blog and an SEC filing.

Roese declares Khosla is basically wrong: "Vinod is a smart venture capitalist and I don't doubt his ability to recognise innovation in startups, but his view on our ability to innovate at scale is not entirely accurate."

EMC and Dell will up R&D dollars "in incremental and disruptive technologies" as well as "aggressively seed, cultivate, acquire and scale disruptive startups," which is more than the partnership Khosla is encouraging.

Roese asserts that the removal of EMC's quarterly reporting burden once it's acquired by Dell will end a big distraction from innovation and enable more money, some "$3.5bn" more, to flow to research and development, instead of those dollars being spent on share buybacks and dividends. He doesn't say anything about that money being spent on servicing and reducing Dell-EMC's debt burden.

Roese says EMC has a bi-modal record in acquiring innovations – think XtremIO and DSSD – and generating them in-house; witness CloudPools, Atmos, ViPR, ECS, Vblocks, most of Cloud Foundry, RackHD, and CoprHD. This directly contradicts Khosla's point about Dell, EMC and Cisco not having generated "a single new idea over the last 30 years."

Frankly, El Reg thinks, this is simply bullshit. Innovation in tech is not a new idea in hardware and/or software device or process – there has been lots of it, both in startups and in established companies. Innovations in tech can be patented. Here is a list of recent EMC patents, with two already in 2016.

Obviously innovations differ in significance; they're not equal. Khosla may have meant that none of the innovations he knows about in Dell and EMC would have been significant enough for him to fund startups pushing them. How can we know?

It is worth noting that Khosla has invested in startups whose prospects he wants to keep strong, and they need to grow in spite of competition from incumbents, like Dell and EMC. So he's not a disinterested party here. Not that Roese is a disinterested observer either. He has an employer to support, EMC, and a Dell-EMC acquisition to help on its way.

Roese's blog ends ringingly, "There will never be an end to the opportunities for organic growth and strategic external investment as long as innovation remains core to being successful in business and IT."

Well, yes, indeed, but will a Dell-EMC entity carry on with EMC's innovative bi-modal ways?

That's a question Khosla might have asked, and been more convincing in the asking. And we might have got a better answer from Dell and EMC too. ®