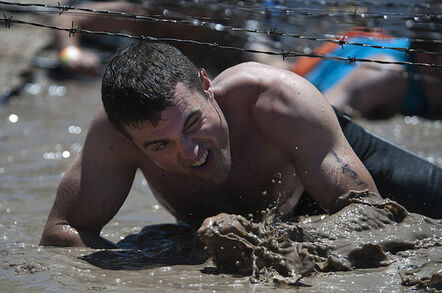 European and Chinese telco bureaucrats are stripped and ripped and ready for four years of obstacle-course-racing to make sure their 5G is the 5G for the whole world.

Although Europe and China are officially cooperating on 5G standards, both sides want their patents to be the best patents, their standards to be the best standards, and their vendors to take the crown (even though there's only a muddy definition of what 5G is, with world plus dog tipping anything the marketing department can think of into the battle-pit).

In the blue corner, Europe's telcos are pumping iron at the behest of head coach Günther H-Dot Oettinger. Financial Times (paywalled) says Oettinger summoned European telco bosses to boot camp on Tuesday to show off their moves and suck down the supplements.

FT says Oettinger wants the industry to ensure there's a home market for European 5G kit and services. If Europe isn't a leader in 5G, he fears China, Japan and South Korea will be.

To defend Europe's patch, he wants the industry to work out its "strategic investments" and create a 5G deployment "action plan."

In the red corner, China's Ministry of Industry and Information Technology (MIIT) has finished sprint-training its 5G team, according to Mobile World Live.

Under head trainer Cao Shumin (boss of the IMT-2020 (5G) Promotion Group), the Chinese team has been running technology verification tests since September 2015. When that phase ends the marathon begins, with a year working on "technical solutions" tests that will prove systems up to the single base station level. After that, 2017-2018 will be devoted to testing complete networks.

There'll be thrills a-plenty as the mud flies, since the best the world can expect is for actual 5G standards to take shape in 2017 and beyond. ®