Well done, thanks for giving PHBs everywhere a great idea for 2016 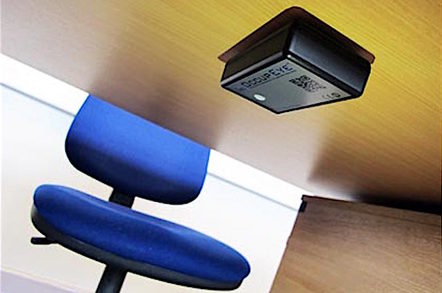 Eye spy OccupEye ... How the sensor box can be fitted to a desk

Staff at one of Britain's oldest national newspapers got a shock on Monday morning when they found monitoring sensors installed under their desks.

The boxes, sold by OccupEye as a way to monitor how long staff are at their desks without relying "on coffee cups and coats on chairs," were installed in the offices of The Daily Telegraph. Staff weren't told anything about the installation and soon kicked up a storm of protest.

The devices were installed under the desks of journalism, advertising, and other commercial departments. There's no word if HR got them too.

In response, some staff removed the batteries from the devices, while others called their colleagues in rival press organizations to leak the news. In the wave of this public backlash, management said the boxes were there to monitor building heating systems and agreed to remove them.

"In the light of feedback we have received from staff it has been decided to withdraw the under-desk sensors immediately. We will be looking at alternative ways to gather the environmental sustainability data we need and will keep staff in touch with any new proposals," the firms said, according to the Financial Times (paywalled).

OccupEye sells itself as a company that can give building managers a good idea how long their desk space is being used. The sensor boxes contain motion and temperature sensors that link back wirelessly to central network points and let HR know who is, or isn't, at their desks.

The firm extols the virtues of hot desking as a money-saving tip for companies. Hot desking eliminates personal desks and just sets up a central pool of furniture that people use on a first-come, first-serve basis.

While beloved of accountants, hot desks are usually very unpopular with staff, who face the breakup of team structures and an extra layer of uncertainty when coming in to work in the morning.

But the OccupEye system is just one of an increasing number of staff monitoring systems that companies are introducing in the name of efficiency. These are all totally legal, so long as employees are informed.

Take, for example, Boston startup Sociometric Solutions, which builds personnel smartbadges that come equipped with sensors to track an employee's movements and location and a microphone for checking how long they talk to fellow workers.

Such hardware devices are easily spotted, as the Telegraph staff showed, but increasingly software is being used in this way. Seattle firm VoloMetrix was set up to sell software monitors that check how staff are using their computers during a work day for email, calendar and office applications.

In September, Microsoft bought the firm for an undisclosed sum and is now planning to integrate it into Office 365 and Delve. It saves all the hassle of having HR looking over your shoulder, but could well prove unpopular with those being monitored.

The increasing use of smartphones in the office is speeding this along, but has downsides for the companies using it. A California legal practice successfully sued an employer recently for taking monitoring a little too far.

The case revolved around a staffer whose GPS location showed him to be lunching in a local strip club. The manager doing the snooping promptly fired the employee, and called up his wife to suggest she asked her husband why he no longer had a job.

The company lost the ensuing legal case, but such lawsuits are becoming increasingly common. HR departments who institute these types of monitoring products are going to have to be increasingly careful about how they are used, or risk losing more money than they save – not to mention dissuading people from working there in the first place. ®

Amazon Web Services doubled its footprint in the UK and will only get bigger, reckon analysts

Capita retains software and IT services top spot... for now