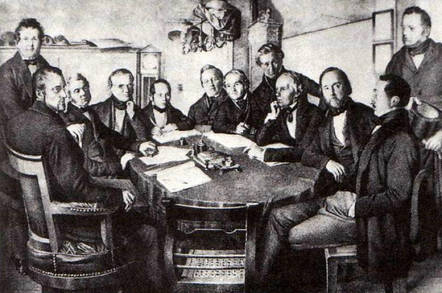 Basho Technologies is being sued by its cofounding ex-CEO, who alleges a major investor caused a disastrous fall in the company's finances.

Antony Falco and Earl Galleher founded Basho in 2008. The biz, based in Bellevue, Washington, develops the Riak distributed NoSQL database that can store massive amounts of unstructured data. It has had a complicated funding history, and is now led by its third CEO. Here is a timeline for the main funding and leadership events:

Collins is now a managing director of strategic planning consultancy CooperGates, which he started up in September 2014 with Galleher, who is also an MD at the firm.

The complaint alleges that Georgetown CP negotiated in bad faith with Southeast Venture regarding the funding of Basho prior to the G round. Georgetown CP commandeered the G round, it is alleged, and harmed previous investors in the A, B, C and E rounds. Investors owning 7.18 million preferred stock shares in Basho are plaintiffs in the suit alongside Galleher.

Another part of the complaint alleges Georgetown CP destroyed business prospects for Basho.

It is also alleged that "Basho's fortunes slid precipitously at the hands of a faithless controller. Georgetown committed serial fiduciary breaches in expropriating hard control over Basho and, subsequently, pursuing other self-interested goals in direct conflict with the interests of Basho."

It claims Basho was among the NoSQL market leaders in 2013, but has fallen behind its rivals because of the trouble allegedly caused by Georgetown CP.

Galleher claims that, after he raised concerns, Basho illegally terminated a consultancy agreement with him when he was still on the board. Also, CEO Adam Wray was hired by Davenport and another Basho board member, Robert Reisley, without consulting the overall Basho board.

Potentially tens of millions of dollars of damages are in play.

Galleher told us: "As you may know, the Delaware Court of Chancery, where this matter is being litigated, is the preeminent business tribunal in the US. As such, it holds parties and counsel who come before it to very high standards, which limits what can be said about pending matters outside of formal court proceedings and filings. For this reason, my comments are necessarily constrained."

What I can tell you is that we regret that circumstances have brought us to this point. Having been left with no realistic choice other than to commence suit, however, we intend to aggressively pursue these and possibly additional claims in order to restore the considerable losses sustained by Basho and the shareholders identified in the complaint as a result of the actions of Basho's controller and its facilitators described in the complaint.

In August 2015 Basho claimed its strongest "second quarter in its history, setting it up for explosive growth during the rest of 2015. Basho drove bookings growth by 226 per cent in Q2 2015 versus Q2 2014, and more than doubled bookings year-to-date compared to the same timeframe last year. The company also grew customer acquisitions by 50 per cent over the previous quarter."

Separately we have heard that Basho's inside sales and regional account managers are facing downsizing, that engineering will be affected, that both the Japanese and Washington DC offices have been closed, and Basho's European operations are being slimmed down.

A Basho spokesperson said the database biz "does not comment on pending litigation," adding:

Basho is a steadily growing company. Since this management team joined Basho in 2014, business grew substantially in 2014 and more than 50 per cent in both bookings and revenue in 2015, exceeding the growth rate of the market overall.

In our ongoing efforts to support our existing and future customers for the long term, Basho is focused on continuing its aggressive growth strategy and to that end is realigning certain positions and shifting resources accordingly.

"We are continuing to hire in engineering and other key areas," the spokesperson continued. "We plan to continue on our growth trajectory in 2016, and look forward to the continued success of the company." ®