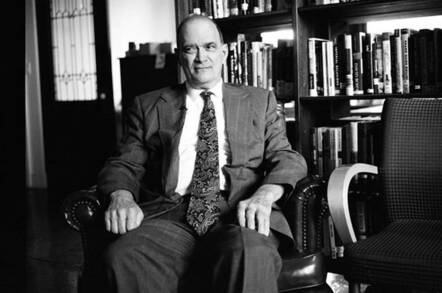 Plans by the UK's Conservative government to legitimize the mass surveillance of Brits won't work, and will cause lives to be lost to terrorism.

That's the view of a former senior US National Security Agency (NSA) staffer, who will sound off on blanket snooping at a parliamentary hearing this afternoon (Wednesday).

William Binney, the former technical director of the NSA's Analytic Services Office, will give evidence before the Investigatory Powers Bill committee, which is scrutinizing proposals to grant fresh spying powers to British agencies.

He will tell MPs that the government is lying about the usefulness of mass surveillance, and that analysts will struggle to find needles of useful information in haystacks of irrelevant data.

In other words, crucial intelligence will be lost in the noise, and decisions that could save lives will not be taken as a result.

"Bulk data over-collection from internet and telephony networks undermines security and has consistently resulted in loss of life in my country and elsewhere, from the 9/11 attacks to date," he will tell the joint select committee.

"This approach costs lives, and has cost lives in Britain because it inundates analysts with too much data. It is 99 per cent useless. Who wants to know everyone who has ever looked at Google or the BBC? We have known for decades that that swamps analysts.

"The net effect of the current approach is that people die first, even if historic records sometimes can provide additional information about the killers (who may be deceased by that time)."

Binney has previously described as "absolute horse shit" claims by the UK government's lawyers that the huge volumes of data collected by the intelligence services won't be readable at the point of inception.

"These statements are false," he said in November, and is expected to repeat today. "They were made by someone who does not understand the technology."

Binney knows what he is talking about. In a career spanning more than three decades, he specialized in enabling government intelligence gathering, firstly as a Russia specialist during the Cold War, and later as co-founder/leader of the NSA SIGINT Automation Research Center.

In the wake of the September 11 attacks, Binney became concerned that the NSA's approach of collecting all available data on everyone was misguided and illegal. He, and others within the NSA, favored a selective surveillance regimen against selected targets, but this idea was shot down by government controllers.

Binney quit the agency shortly afterwards and started his own security consultancy. After the 2005 New York Times story that the NSA was conducting mass spying on Americans' communications, he was interviewed by the FBI but cleared of wrongdoing.

A few months later Binney was arrested at gunpoint by the FBI while in the shower, and other NSA staff who had raised similar questions were also collared by the Feds. After the NSA withdrew his security clearance, his business collapsed, and Binney went fully public with his analysis of the current surveillance state.

Since then, he has addressed the EU Parliament on the issue, and is now visiting the UK to spread the word. The wheelchair-bound whistleblower says he wants to help the UK avoid making the mistakes of their American cousins, as he has pointed out before.

"The alternative approach based on experience is to use social networks as defined by metadata relationships and some additional rules to smartly select data from the tens of terabytes flowing by," he will say later today.

"This focused data collected around known targets plus potential developmental targets and represented a much smaller set of content for analysts to look through. This makes the content problem more manageable and optimizes the probability of analysts succeeding.

"This approach also has the additional advantage that protected groups can have their communications screened out and excluded from bulk collection and analysis, unless a designated and authorised targeting authority is in place." ®