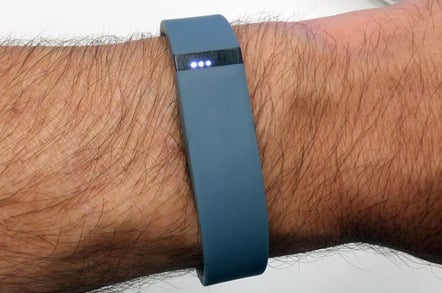 A US research lab specializing in wearable devices says Apple and FitBit are ripping off its inventions without paying a dime in royalties.

A pair of lawsuits [PDFs] filed by Valencell in the Eastern District Court of North Carolina on Monday allege that both companies' wearable bands violate four of its granted patents for wearable sensor devices.

The technology in question is covered by these US patents:

According to the complaints, Valencell spoke with both Apple and FitBit about licensing its patents for their wearable devices, only to discover later that they had allegedly copied the technologies and used them in their own products without paying.

In Apple's case, Valencell says a team from Cupertino spoke with them in 2013 about its supposed interest in a licensing agreement, but never struck a deal. Instead, Valencell claims, Apple looked up Valencell's research papers on the technologies (Valencell points to web server access logs showing Apple-owned IP addresses) and held meetings to view and then copy its technologies without paying a licensing fee.

According to Valencell, Apple actions were based on "a business decision that the benefits of infringing upon Valencell's patented technology outweigh the risk of being caught and ultimately forced to pay damages."

FitBit, meanwhile, is accused of using a 2014 meeting at the CES conference to scope out Valencell patents, and later copying the technology in its own wearables without paying a licensing fee.

"We've seen some companies choose to use our patented inventions without pursuing a patent license," Valencell president Dr. Steven LeBoeuf said of the filings.

"We will defend our intellectual property to ensure our current and future licensees get the full value of licensing our inventions, as we continue to innovate around our foundational dream of seamless, personalized mobile health and fitness."

Valencell is seeking unspecified damages from both companies.

Apple declined to comment. Fitbit told us it "has more than 200 issued patents and patent applications in this area," adding: "Fitbit plans to vigorously defend itself against these allegations." ®