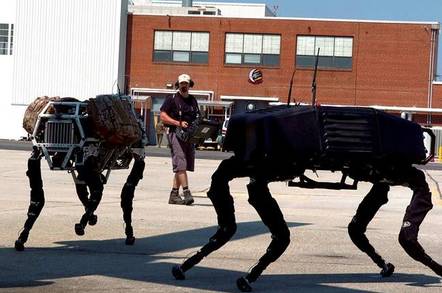 What's that Lassie? You're rubbish?

Vids The US military's flirtation with robotic pack animals looks set to end: the Marine Corps has halted further testing of the BigDog contrivance from Google stablemate Boston Dynamics.

BigDog, aka the Legged Squad Support System, has been under development at a cost of $32m, with the goal of making a four-legged machine capable of carrying 400lb (181kg) of supplies. The final design did just that, but painted a target on the troops it was supporting.

"As Marines were using it, there was the challenge of seeing the potential possibility because of the limitations of the robot itself. They took it as it was: a loud robot that's going to give away their position," Kyle Olson, a spokesman for the Marine's Warfighting Lab, told Military.com.

BigDog's carrying power wasn't disputed, and the robot dealt well with clambering over rough terrain without a human controlling it during the 2014 Rim of the Pacific war games. But the power needed to do all this required a petrol engine, which was so loud that the enemy could hear soldiers approaching before they saw them.

Boston Dynamics did develop a smaller, electric-powered robotic dog called Spot. This was also tried out by the Marines at its massive Quantico base in Virginia, but Spot could only carry 40lb (18kg) of equipment and needed a human to guide it.

"I see Spot right now as more of a ground reconnaissance asset," said Capt. James Pineiro, the Ground Combat Element branch head for the Warfighting Lab. "The problem is, Spot in its current configuration doesn't have the autonomy to do that. It has the ability to walk in its environment, but it's completely controller-driven."

He said that both programs have now been shelved and the robots have been put into storage. While the US military won't be getting pack animals soon, the project isn't entirely dead yet.

"We tend to play with things that are fanciful and strange," Olson said. "Learning from it was a big part, and we're still learning." ®