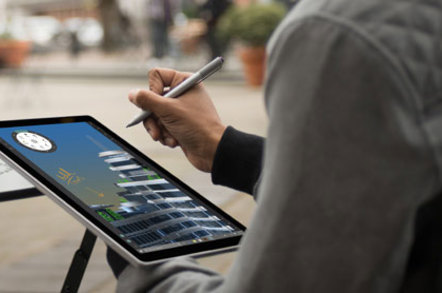 Review Against all predictions, Microsoft has made a profitable multi-billion dollar business out of a boutique tablet. It has also turned a bog standard commodity Thing - a Windows laptop - into something desirable. And it has done it all without fully answering the question “Why should I have one?”

The Surface began life only three years ago as a cosmic joke, and Microsoft soaked up expensive write-downs. But after turning the tablet into a Windows laptop (only one that came not as one expensive part, like an Apple’s laptop, but three expensive parts), Surfaces began to sell like hot cakes. This year the public’s ardour for Surface has cooled somewhat: it was down to $672m in the quarter ending September 30th, down from $908m annually, but that may reflect that the launch of the SP4 came later in the year.

Why get a Surface Pro? Well the immediate answer “because it’s cool”, doesn’t cut it. It’s a circular reply. A solipsism. So is “because I needed a laptop and, er … I could expense it”, which is the second most popular answer I hear, one that's surely closer to explaining the Surface’s success. 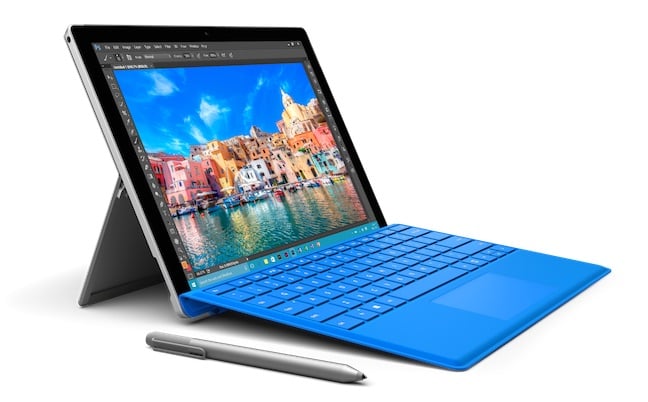 The utilitarian reason that people use to justify paying such a hefty premium for a Surface Pro is "dual use". In the horrible marketing jargon, it does both "lean forward" for work, and "lean back" for watching TV, or dorking around on social media.

Of course you don’t need a hybrid machine to do this: you can do much of this with a cheap tablet and keyboard combo, and then have several hundred (or more) pounds left in your pocket. (Last year’s iPad Air 32GB + keyboard = a shade over £400). The only thing you can’t do with this combo, and Android combos are cheaper, is run x86 applications.

(And then try getting that Android tablet through on expenses.)

Here’s what I found.

There’s no getting away from it, the Surface Pro a very smart looking piece of industrial design indeed. The magnesium unibody case looks and feels great. This year it has barely changed. It’s a tiny bit (50g) lighter and thinner, but you’d have trouble telling them apart side by side unless you were familiar with the Surface range, and even then, you’d probably have to pick them up to be sure. The power button has moved (it’s on the top when you’re using it in landscape mode). It has much stronger magnets down the side for a much improved Pen - and the Pen now comes “free”.

The Surface’s display has been amped up from 2160x1440 to 2736x1824, all in the same 12.3 inch diagonal. The designers have all but done away with the bezel. The display was the most startling thing about the Pro 3, and it’s even better now.

The Surface Pro 4 has one spooky, Minority Report party trick. It uses biometric scanning to log you in. It couldn’t be any more futuristic unless a hoverbot popped up in front of your face then flew out again. The machine actually uses two cameras and an IR sensor to authenticate you, so you’re not holding up a picture. I found this worked uncannily well, unlike the iris scan on the new Lumias, where it guzzles power constantly, and then once it’s glommed onto a face, only recognises you some of the time.

As well as a new pen, Microsoft has upgraded the keyboard (not included, of course) quite substantially. The fourth generation Surface keyboard has more spacious keys, with real distance between them, and a much larger touchpad that’s now glass. It’s terrific, and you can use the fourth-gen keyboard with a Surface Pro 3. And to be honest, given the woes I am about to describe, I wouldn’t blame you if you did.

But Microsoft wouldn’t have an absurdly aggressive launch just for a keyboard and pen, could you? Apparently so.

The problems began when I began to use it, for if the Surface Pro 4 is the “Surface Pro 3 only more so”, that unfortunately includes the flaws of the SP3. My first SP4 review unit wouldn’t wake up the screen after a few days. This issue plagued early review samples, and Microsoft kindly swapped out the dodgy one.

Leaving aside its versatility and design, I found the SP3 actually scored poorly compared to rival Ultrabooks for battery life and reliability - and this a PC that really cooks. Not in a good way. I concluded that there is room for a version of the kids' classic, Go The Fuck To Sleep - aimed not at parents, but Surface Pro owners. This is a machine that doesn’t go the fuck to sleep. I got used to having my bag warmed from the inside by the SP4.

Battery life teetered too, barely extending to four hours in practical terms. I really wanted to show off my swanky SP4, but out of necessity, ended up taking my usual notetaking options with me instead: an ancient Thinkpad X series, or an iPad Air with a Bluetooth keyboard. How much I wondered is down to errant drivers, or the immature OS? 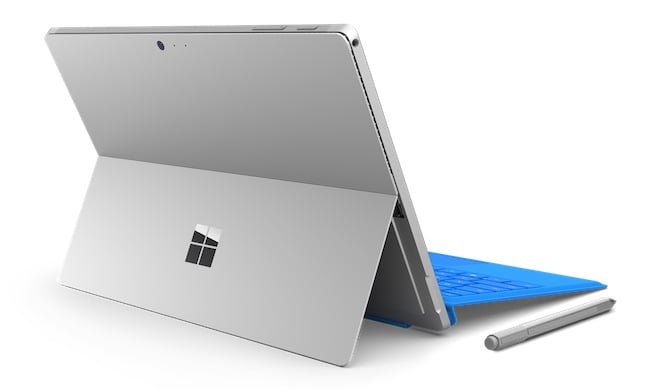 One thing really surprised me: Windows 8.1 is a far more natural fit for the Surface's kind of hybrid than Windows 10. The SP4 is Windows 10 only, so I’m basing this judgement from using the SP3 with Windows 8.1, and the SP4 with Win10. If you'd suggested at the start of the year that anyone would be wishing that Windows 8.x ran on their PC, I'd have thought them a bit odd.

But perhaps we shouldn’t be surprised: Surface was designed to showcase the new Windows paradigm, with its touch-first UI, that also served up a desktop when you needed to run grown-up apps. What made Windows 8’s design so annoying to desktop users is actually a boon on "dual-use" devices. When you rip the keyboard off a Surface you want a tablet, touch-first UI. What you get instead is Windows 10’s designed-by-committee compromise.

In fact, “design” isn’t a word I’d readily associate with Windows 10: it’s more of a tentative peace agreement between warring factions. When you detach the keyboard from a Surface now, it goes into a “touch-friendlier” mode but that’s it. The Explorer elements (icons) get a little larger. But the Tablet Mode desktop loses its bold, cartoon-like simplicity and its broad sweeping gestures. It’s harder to use, and harder to read. The spidery font and hard-to-distinguish wireframe icons just don’t seem natural here.

Like the latest Lumias, the Surface Pro 4 seems to me great hardware let down by the software. Windows 10 is going to take time to get ready (six months after I said it needed at least six months, it isn’t close). Meanwhile rivals are catering to the “lean forward and lean back” hybrid in their own way.

HP’s Elite X2 is a hybrid that’s similar to the Surface but with a stronger battery, more ports and a SIM card. Lenovo’s Yoga range is broader, with the high end offering a better screen, and Lenovo is set to unveil some serious Surface competition at CES in a couple of weeks.

Should I get a Surface Pro 4?

OK, here's my verdict. Even if you’re dead set on a SP4, I’d hold off until the bugs are addressed - and unlikely as this seems, the machine can run a more reliable Windows running on it. ®