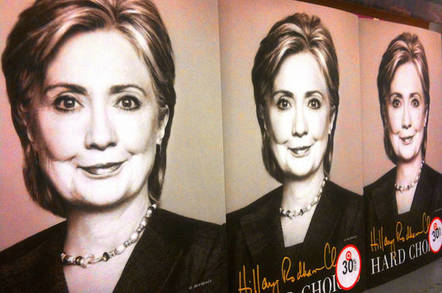 Democratic presidential front-runner Hillary Clinton has waded deeper in to the debate on encryption with the observation that “maybe the back door is the wrong door”.

Speaking at a debate for Democratic candidates, Clinton was asked if she would legislate “to give law enforcement a key to encrypted technology”.

Clinton's response was to say “I would hope that, given the extraordinary capacities that the tech community has and the legitimate needs and questions from law enforcement, that there could be a Manhattan-like project, something that would bring the government and the tech communities together to see they're not adversaries, they've got to be partners.”

She went on to say “maybe the back door is the wrong door, and I understand what Apple and others are saying about that.”

That position weakens Clinton's previous calls for weaker encryption, but just what other "doors" she referred to was not explained. Clinton's campaign site says defeating ISIS will require “better coordination and information-sharing all around to break up terror plots and prevent attacks—between European governments and law enforcement, between Silicon Valley and Washington, and between local police officers and the communities they serve.”

The nature of the “Manhattan Project” analog on encryption co-operation was not explained, so it's hard to say just what Clinton imagines might be the outcome of a massive, secret, three-year project. Presumably Clinton's keen on a scheme whereby law enforcement agencies gain access to encrypted data without compromising privacy. Good luck with that, Hillary, as a vote-winner and technical challenge. ®

You can flush the messages, but you need to wipe too