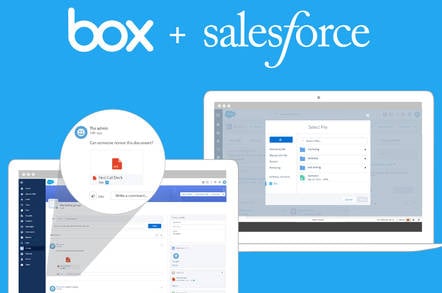 Salesforce and Box have announced new integration features, including an SDK for developers.

Salesforce Files Connect for Box enables access to files stored in Box for users on the Salesforce platform. Box content can be connected to Salesforce records, users or groups.

The Box SDK for Salesforce, available on GitHub, is a library for developers building applications on the Salesforce Force.com platform, enabling easy access to the Box content API.

These new products add to the existing Box for Salesforce, which is already available to Box Enterprise customers.

While the Box SDK is free, pricing for Salesforce Files Connect will be announced when it is made generally available, planned for the summer of next year.

The Salesforce announcement follows other partnerships Box has made in 2015, with companies including IBM and Microsoft (Office 365 and Windows 10). Box also integrates with Google's Android for Work.

The Box Platform, a set of APIs for authentication, user management and access to content, was released for general availability in October.

Box also announced its third quarter financial results earlier this month. Revenue was up 38 per cent year on year, to $78.7m, but the company made a GAAP operating loss of $55m. It is aiming to position itself as an enterprise-oriented cloud content platform, in competition with others including Dropbox, Microsoft and Google.®

Salesforce takes the multi-signer DNSSEC ball and runs with it

Oh, and the last shreds of Metallica's credibility disappearing on stage