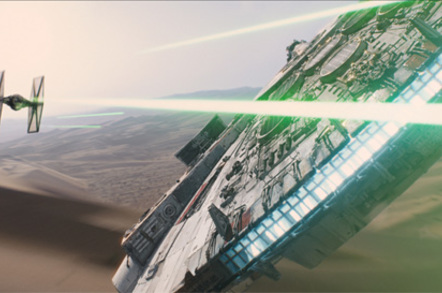 Star Wars special Despite the quasi-disaster of The Phantom Menace run of films, expectations are high for Star Wars: The Force Awakens.

In 1977, Star Wars achieved a rare feat in sci-fi film history – going boldly where Star Trek went before, and establishing a look and feel so distinct and so powerful it spawned a whole culture. Not just films, but also books, cartoons, model Lego kits, spin-off sub stories, conventions ... and yes, even a religion.

With a new film here, it’s worth reflecting on some of the elements of that galaxy far, far away that were responsible for this. We’re talking technology, of course.

The Force Awakens is set roughly 100 years after Menace. The design muse for Menace was closely and clearly modelled on a vision of a tech world from the 1920s/30s, and the age of futurism and optimism, as epitomised in the film by the silver-dream machine that was Queen Amidala’s J-type 327 in episodes I-III.

By Episode IV, rust had set in and the machinery and the technology was bulkier, functional and more, well, frankly ... imperial.

Disney has kept the latest film under wraps, but we can use The Force Awakens trailer to distill a few facts about the state of the Star Wars universe. That, and a little cross-referencing to the odd written work.

Star Wars has always been a little different technologically than other sci-fi universes. Although the galaxy clearly has artificial intelligence in the form of droids, some fairly advanced medical procedures (see the many prosthetic hands and Darth Vader’s full body transformation), clones, energy weapons, and so on, it seems to be in a bit of a lull progress-wise.

The differences between technology in Episode I – III and the gadgets of Episode IV – VI are pretty minimal, but they are there. In Episode VII, that lack of progress is even starker.

Regardless of the type of starship you’re talking about – TIE fighter, X-wing, Imperial Star Destroyer – they’re all looking pretty much as they did during Darth Vader’s time before the Battle of Endor. The biggest change seems to be some red and silver paintwork on the Imperial ships, other than that, these are very familiar vehicles.

Even the Millennium Falcon appears largely unchanged, with just a few minor modifications including a new radar dish – now rectangle shaped, after circular plate was clipped off during Lando Calrissian’s rapid withdrawal from Death Star II, at the end of Return of the Jedi. And the modern equivalent of rebel fighters are even still wearing orange and white jumpsuits.

Obviously, from a fan point of view, it’s nice to see the Falcon back again, but the ship is now nearly a 100 years old and apparently still going strong! In the real world, it’s rare to have any technology in an advanced civilisation remain static for so long, particularly something as integral to galactic life as transportation.

Taking a closer look at the new T70 X-wing versus the T65 version used by the Rebel Alliance in the previous three films, the differences seem mostly aesthetic. The “wings” open differently and are slimmer in appearance. But we’re still talking about a four-engine craft equipped with four laser cannons and two proton torpedo launchers. The X-wing is a cool design, but in the 30 years since the end of Episode VI, it seems odd that no-one has come up with at least some more outstanding modifications.

Apart from a sleaker look, X-wings are almost unchanged

It’s a similar story with Star Destroyers. The beginning of the first official trailer shows an old Star Destroyer apparently sitting in the sands of Jakku, the planet Rey (Daisy Ridley) calls home. When we later see a functional Star Destroyer in the sky with Kylo Ren (Adam Driver) aboard, it seems like pretty much the same ship, as though it was taken out of mothballs to aid Ren in whatever nefarious doings he’ll be getting on with in the new trilogy.

If the Destroyer is actually a new one off the assembly line, that means that ship has had the same design for at least 50 years, which again seems highly unlikely.

Perhaps the most obviously unchanged technology in the trailer is stormtrooper armour. Finn and his co-workers are dressed pretty much exactly how the stormtroopers appeared in Episode IV – VI. The helmet has undergone some slight modifications, making it look more skull-like.

There is one shot that hints at a change, when a silver-armoured figure with a black-and-red cloak that may just be a high-ranking stormtrooper makes an appearance, but the ground troops are the same as always. Even the blasters that they’re carrying look exactly the same.

The only blaster that catches the eye in any of the trailers is the one Han Solo (Harrison Ford) hands to Rey. This isn’t Solo’s own DL44 Heavy Blaster, nor does it look much like a DH17 Blaster Pistol or the Defender Sporting Blaster favoured by Princess Leia. It’s actually one of the shiniest pieces of kit on display and the one of the only gadgets that looks new.

But that is not the new weapon that has everyone talking. That honour goes to the energy staff wielded by a stormtrooper against Finn (John Boyega), which appears to stop his strike with a blue lightsaber! That was bound to light the internet on fire with speculation, since lightsabers are supposed to slice through everything. A weapon that can withstand lightsaber attacks would be a major leap forward and makes the other technological stagnation all the more puzzling.

Speaking of lightsabers, these tend to be generational weapons so it’s not surprising that the blue version wielded by Finn looks like the same one first used by Anakin Skywalker and then passed to son Luke (Mark Hamill), until he lost it during The Empire Strikes Back.

The only new lightsaber we get to see is Kylo Ren’s very cool-looking (if slightly dangerous to the wielder) red weapon, which has an energy crossguard. The addition of the crossguard is very medieval and only adds to the kind of old-tech-reused theme that seems to be running throughout the trailers, despite the fact that it’s a gadget we’ve never seen before.

Even the buzzing sound and jagged light of his lightsaber come across as more primitive than the clean-lined Jedi weapons we’ve seen before, suggesting he may have forged this weapon himself.

Harrison Ford's leg, in the Star Wars film, with the Millennium Falcon door