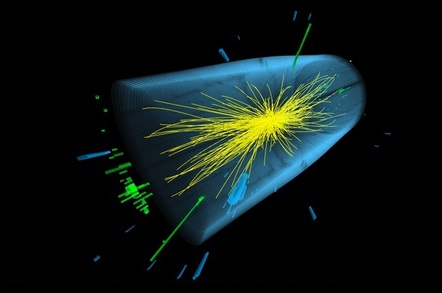 The Higgs Boson will remain a big deal for plugging gaps in the unified theory, but may not be the biggest Boson in the universe.

That's the tantalising prospect raised by analysis of experiments conducted in June 2015 at the recently-upgraded Large Hadron Collider (LHC).

Detailed analyses of those experiments were presented on Tuesday (see PDF) and brush up on your physics before downloading), with those results summarised by Nature.

Later analyses of the experiments noticed something odd: rather more photons carrying around 750 giga electronvolts (GeV) of energy apiece than were expected.

Photons don't appear out of nowhere – something must have made them.

The boffins involved are therefore wondering if they might have accidentally cooked up a previously-unknown something – probably a Boson - that decayed into photon pairs.

There's lots of Ifs still to be resolved, not least the two analyses of the relevant data linked to above found 10 and 40 excess photon pairs respectively, amounts characterised as the merest hint of something worth more investigation rather than the fingerprints of something significant.

More detailed analyses of the June 2015 experiments are due by the end of 2016. And there's more to come: the mysterious results were produced while the LHC was still flexing its newly-enlarged muscles. ®