Banksy's back at it 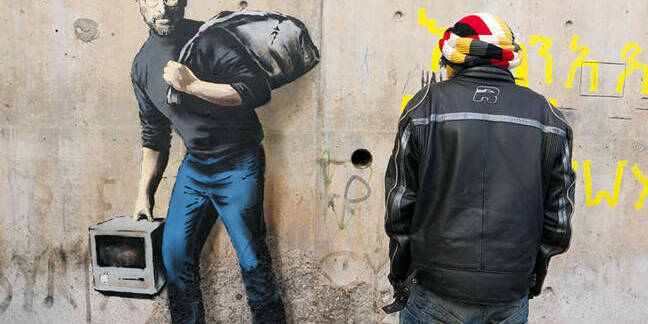 A mural of Steve Jobs has appeared on the wall of a French refugee camp in an attempt to highlight the plight of Syrian refugees.

Jobs, who was himself the son of a Syrian immigrant, is depicted carrying a scruffy old bag over one shoulder and an old Apple Macintosh in his hand. The artist? None other than sharp social commentator Banksy.

The painting is on a wall at "the Jungle," as the tent city that has arisen just outside Calais is known. Pictures of it appeared on Banksy's website with the caption: "The son of a migrant from Syria."

The point is not novel, since people have repeatedly referred to Jobs' history when faced with the xenophobic response that has greeted waves of Syrian refugees trying to escape war in their country. But it is, as always with Banksy's work, keenly observed and beautifully rendered.

Plus of course, it being Banksy, it has already garnered huge attention despite only having been up for a day. 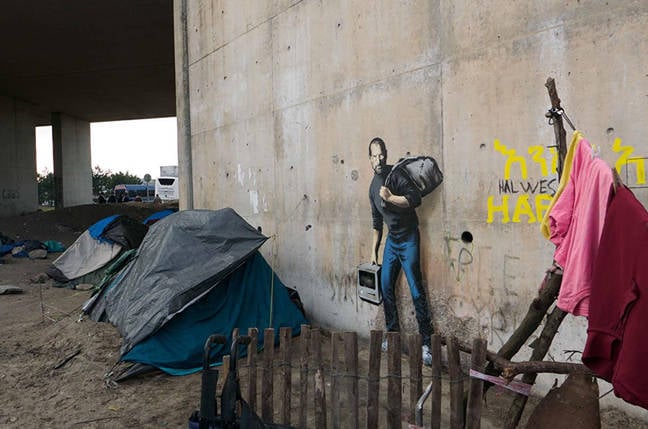 The actual Jobs story is not as neat as some might like in this case. His biological father was Abdulfattah Jandali, who travelled to the US to study, and met Jobs' biological mother, Joanne Schieble, at the University of Wisconsin.

Steve Jobs was raised by Paul and Clara Jobs, Armenians unable to have children. On a positive note, Jandali and Schieble did end up getting married and having another child. However, Jobs never had a relationship with his biological father, although he did believe that he met him once when he ate at a restaurant in Sacramento that Jandali managed.

Although the Jobs' painting is getting a lot of attention, Banksy has posted pictures of two other murals in the same area and making the same broad point, both of which are, arguably, more powerful.

One features a little girl with a telescope looking out to sea with a vulture standing on the end of it. And the other takes the celebrated French painting Raft of the Medusa by Théodore Géricault (which hangs in the Louvre) and pulls it into 2015 with a luxury yacht in the background. 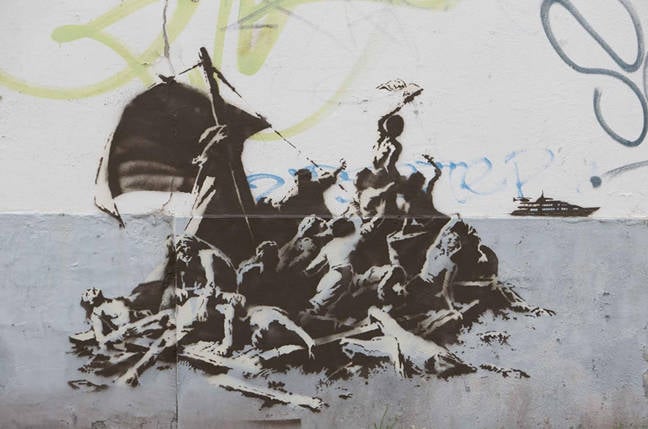 Unusually, rather than simply letting his work speak for him, Banksy also put out a statement on the issue, saying: "We're often led to believe migration is a drain on the country's resources but Steve Jobs was the son of a Syrian migrant. Apple is the world's most profitable company, it pays over $7bn (£4.6bn) a year in taxes – and it only exists because they allowed in a young man from Homs."

It's reductionist, but when intelligent, well-educated, well-meaning people fleeing a war zone are repeatedly referred to as animals and treated as such, it remains a powerful point and one worth contemplating. ®

Batman in the frame to take on Steve Jobs

Christian Bale said to be likely star of Jobs biopic