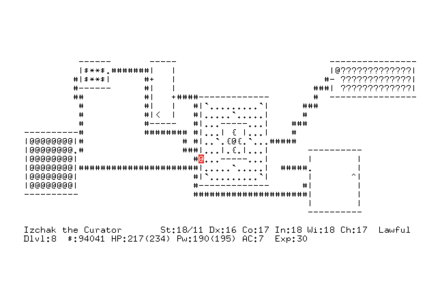 NetHack is one of the gaming industry's foundational texts. The animated adventure debuted in 1987, continuing an ASCII ancestry traceable to 1980's Rogue and earning it a place on the Museum Of Modern Art's list of games worthy of historical preservation.

The game is simple: after choosing a race, gender and character class you navigate your character, represented by an @, through a series of dungeons. The deeper you go, the more powerful are your foes, and the weapons and magical items on hand with which to defeat them.

Somewhere among all the ASCII lies the Amulet of Yendor which, if returned to the surface, grants you victory.

The game made a certain kind of sense in the 1980s, when it couldn't compete with the likes of the Nintendo NES or Sega Megadrive for graphics, but did offer rather longer gameplay than many games of the day.

For obvious reasons the game has only limited appeal these days. Little wonder, then, that the last release adding anything to the game emerged in 2003 with version Nethack 3.4.3 in December 2003.

In April of this year, the NetHack team teased that work on a new version had begun. That new code emerged on Monday and is yours for the downloading here. As the version 3.6 About page explains, the new version is mostly a rollup of previous ideas and patches, some from a leaked 3.5 release and some borrowed from other games.

There's also a fair few references to Sir Terry Pratchett in the game, explained as follows:

“At the time of his passing this year, the DevTeam decided that it would be a fitting tribute to take a number of our favourite quotes from the various Discworld novels and incorporate them into the game. Being the way we are, we did a little more than that. There are now a huge number of quotes from many of the Discworld novels in the tribute file, but this doesn't mean that we wouldn't accept new submissions from other Pratchett fans.” The About page also mentions the game's developers “have spent a large amount of time this past year revamping our own internal infrastructure which, although functional, was not up to date.”

“We've migrated our internal source repository to Git, with plans of providing a publicly available 'current maintenance version' in the future.”

The page also mentions “This summer we had a bit of a reality check due to the outage at SourceForge which has driven some internal discussion about future direction concerning hosting and has unfortunately delayed the release - more to come on this.”

SourceForge has had a miserable year, earning criticism for adding ads to open source code, staggering after a lengthy storage outage and then being put up for sale. That's a set of challenges even a high-level elven knight would find hard to overcome, making the NetHack team's imminent future hosting directions announcement one to watch. ®