Something's bubbling up in the Springpath springs 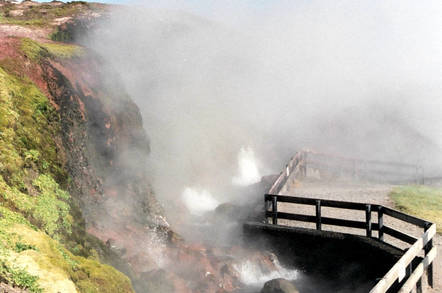 Springpath, the hyper-converged software startup, has cancelled two US briefing events with journalists and industry types. It's also canned its global PR agency, and calls to its contact phone number are not answered.

Springpath presented at Tech Field Day 7 in March. Our understanding is that it was not at the Virtualisation Field Day 6 event in November, cancelling its scheduled appearance. Here's its history:

Cunningham replaced Mahalingam who was both CEO and CTO, and reverted to being the CTO. The announcement of Cunningham's appointment is no longer available on Springpath's website, although he is listed on the company's leadership page.

In September this year, hyper-converged infrastructure appliance startup Simplivity sued Springpath. Andrew Perry left as veep of sales at Springpath in October, joining Maxta as its senior vice-president for worldwide sales the same month. That meant Springpath has no head of sales. Joe Dillon is veep Sales for the Americas, and is listed on Springath's leadership team webpage.

We've heard rumors from several directions saying Springpath is being bought by Cisco. We asked Springpath's PR agency for comment but were told: "Racepoint Global is no longer working with Springpath." It was working for Springpath as recently as late October.

Calls to Springpath's main number were not answered at time of writing.

Something is happening at Springpath – we just don't know what yet.

If Cisco did buy Springpath, it could reenter the storage business with a Unified Computing System (UCS) server-centric offering, which would not prejudice Cisco's Flexpod arrangement with NetApp, and similar converged system reference architecture deals in the storage array area.

It's thought that up to half of Simplivity's sales come via its Cisco relationship and these would be prejudiced by a Springpath acquisition.

Springpath is operating in a crowded market with three dominant players: VMware (VSAN), Nutanix, and Simplivity, plus software-only startup companions such as Maxta. The likely exit for such a software startup is by acquisition. ®

How do you win at HCI? It's SimpliVity ... or maybe not, right Dell?

Analysis Magic quadrant shows HPE has its work cut out