He got off light 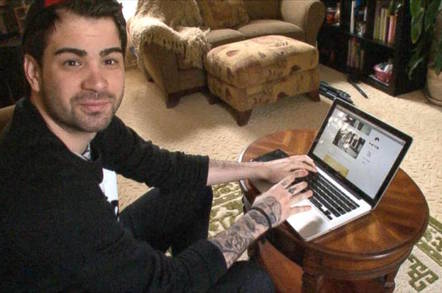 Hunter Moore was sentenced by a federal judge in Los Angeles on Wednesday, nine months after he pleaded guilty to hacking and "aggravated identity theft." He was facing up to seven years in jail and a $500,000 fine.

When released, Moore will be subject to three years of supervised release during which time he must declare all email accounts, screen names, passwords, and ISPs to the court.

Moore's sentence is only slightly higher than that of his accomplice Charlie Evens, who Moore paid to hack into women's email accounts and grab nude photographs. They were then posted on the IsAnyoneUp.com website, often with the women's contact details. Evens was sentenced to two years in prison and three years of supervised release.

According to court reports, Moore, of Studio City, California, showed no emotion when he was read victim statements. In one such statement, a 28-year-old woman recounted how topless photos of herself that she had taken and sent only to herself appeared on Moore's website along with her name, Twitter account, and city she lived in.

"During most of the time period when my photo was on the website, I was in bed curled into a ball feeling unable to act or move," she told the court. "At home, I was scared for my life. There was even a stalker parked in front of our house on two evenings."

Meanwhile, Moore was crowing about his activities. He was profiled in Rolling Stone, which called him "the most hated man on the internet." He even appeared on TV talk shows.

California responded in August 2014 by expanding the law to cover selfies.

Fortunately, someone does still love Moore. His mother spoke in court, saying that her son was "a good person who made a huge mistake."

Meanwhile, the first conviction under that anti-revenge-porn law came in December 2014 when 36-year-old Noe Iniguez was sentenced to a year in jail and three years' probation for posting topless pictures of his ex-girlfriend on Facebook.

Checking in with Craig

Brittain reached agreement with the FTC in January that he would not post people's nude photos on his website or anywhere else online and would destroy thousands of pictures in his possession. His site – IsAnybodyDown.com – was a copycat of Moore's website except that Brittain tricked women into sending him nude pictures, rather than hacking into accounts and stealing them, like Moore did.

True to form, when Brittain's association with Dryvying was exposed, he and the company started posting dozens of aggressive, accusatory tweets. What a fine, upstanding member of society. ®

As I mentioned, our competitors can and will make up baseless rumors, without disclosing their own connections to #Uber/#Lyft.

Cash for new reporting tool, of which we already have two, plus smuttmeister research

And I the while, the sole unbusy thing, simply upload – neither pair, nor build, nor sing