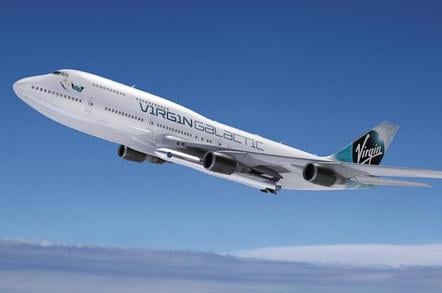 Is that a satellite launcher under your wing or are you just pleased to see me?

Sir Richard “Beardy” Branson's space company Virgin Galactic has decided to use a 747- 400 formerly used to ferry passengers as a satellite launch platform.

Virgin Galactic's developed a rocket called LauncherOne, the design for which envisages that a conventional aircraft will hoist the rocket a fair distance into the atmosphere to reduce the cost and complexity associated with launches from terra firma. The company's also working on SpaceShipTwo, a space tourism vehicle that will launch from beneath a specially-designed plane named WhiteKnightTwo.

Until this new announcement, WhiteKnightTwo looked like it would get the job of carrying LauncherOne. But Virgin Galactic's now decided a 747-400 that's surplus to requirements at Virgin Atlantic can do the job.

The 747 can carry a fifth engine if required, a facility that came in handy in the days before ultra-reliable jet engines, as it allowed airlines to deliver a spare engine or send one off for maintenance. Virgin Galactic will use a spot under the left wing adjacent to the mounts used for the fifth engine to hang LauncherOne.

The video below shows how it's all expected to work.

LauncherOne can sling a 200kg payload into what Virgin Galactic calls “standard Sun-Synchronous Orbit for a price below US$10 million, with the option to purchase further increases in performance to the same orbit and for launches that reach other altitudes or inclinations.”

If you fancy, and pony up, the rocket can carry “over 400kg of payload to other orbits.”

Virgin Galactic might be onto something here, because the 747 is going out of style as airlines prefer cheaper-to-operate twin-jets that now match the Jumbo for capacity and comfort. Boeing's won just two orders for the 747 this year, and those were for freighters. Virgin Atlantic's 747-400s are therefore not likely to find a willing buyer, but do have a potential payload of over 100,000 kilograms and a ceiling of 45,000 feet.

Virgin Galactic's not saying what LauncherOne weighs, but clearly it's light enough that a 747-400 can haul it to a useful height even after the rocket messes with the plane's aerodynamics. ®