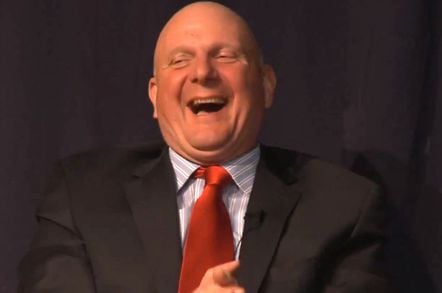 Microsoft's biggest individual shareholder – its erstwhile CEO Steve Ballmer – has complained in classic ballsy fashion about the software giant's lack of disclosure about its cloud biz.

According to Bloomberg, Ballmer said that profit margins and sales were a "key metric" that should be reported by MS.

He added that the firm's use of a revenue run rate – which simplistically predicts an annual sales outcome on the strength of one quarter's performance – was "bullshit".

Microsoft uses this run rate figures for its cloud business, as does rivals in that market, such as IBM.

Ballmer told the news wire that Microsoft "should report the revenue, not the run rate," and added that margins were also important numbers to divulge for cloud services.

He didn't stop there, either.

Ballmer, who resigned as Microsoft chief in 2014, opined that Windows phones should run Android apps.

Microsoft told us it was not commenting on Mr B's comments. ®

Steve Ballmer: Get the Facts. I 'love' SQL Server on Linux

Microsoft Bing is 10: That thing you accidentally use to search for Chrome? Still alive and kicking

Used in 34% of American searches. Really