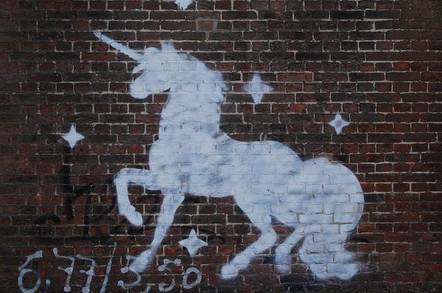 One of the United States' largest fund managers has pricked the bubble of Silicon Valley by suggesting that today's enormous tech valuations are not realistic.

Will Danoff of Contrafund – a retirement fund of Fidelity Investments that boasts $111 billion invested – has warned that his faith in so-called "unicorns" is not high.

"There are so many unicorns. It means you have to be more careful than we were three or four years ago," Danoff told news agency Reuters. "Maybe we are at a point where it's going to lose a bit of luster."

"Unicorn" is the recent term given to companies valued at over $1bn. Until recently, the Valley was very excited about the term and there were endless seminars about the magic approaches that these rare companies were adopting.

As the number of them has grown while the arrival of actual profits has not, however, people have also started noting that unicorns do not actually exist and are often no more than a figment of people's overactive imaginations.

Danoff also poked at another rising fear – that the bust is coming after several years of boom: "These phenomena are cyclical. You have confidence early in the cycle, but you do investments with extreme caution later in the cycle. I'm much more careful with my recent moves in the private space."

Among those "moves" are a $450m investment in Pinterest and $190m in Uber, as well as another $750m in a range of other startups, making Contrafund the biggest investor in non-public companies in the country.

Danoff has some credibility: he has been a mutual fund manager for over 15 years and consistently produced returns significantly above the stock market average. According to Reuters, Danoff is responsible for an annualized total return of 8.12 percent versus a benchmark five percent.

He also spoke about companies going public – something that Silicon Valley has been unwilling to do with its posterboy companies in recent years – by noting that as an investor you may get only one opportunity to invest in a unicorn before it goes through an IPO.

That might help explain the enormous valuations in recent years in companies that are still running at enormous losses despite large numbers of customers. It is also the case that many of the venture capitalists have learned their lessons from the last San Francisco boom-and-bust and are giving themselves investment terms that mean the companies only need to be worth the amount they have invested to make a profit.

Last month, one of the tests of the tech boom was the rare IPO of credit card reader company Square. Despite having been valued at $6bn in its last round of private funding, its IPO valuation was put at $4.2bn (between $11 and $13 a share). When that price gathered a lot of critical press, the company's Wall Street advisors pulled the price down to $9 with a total valuation of $2.9bn.

They got the launch spike they wanted – back up to their initial valuation – but since then the share price has been on a slow slope down. It closed on the first day (19 November) at just over $13; on Tuesday it closed at just under $12.

In response to growing concerns, the private valuations of a number of companies, including Snapchat and Delphix, have also fallen significantly – between 25 and 40 per cent.

The big question is whether Silicon Valley can handle the deflation of its own hot-air bubble in a controlled way or whether it will keep puffing itself up and risk a pop. ®