'Dear Daddy...' Max Zuckerberg’s Letter back to her Father

What do you mean, I can't get off Facebook? 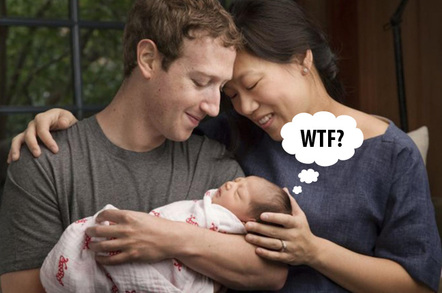 Comment Yesterday Mark Zuckberg accompanied the birth of his first child, a daughter Max, with a long open letter.

Thanks to the miracle of modern technology, we've found what Max might write back, and we're sharing it with you:

That’s why you Daddy, are so special.

You write: "We want you to grow up in a world better than ours today."

If I discovered that my well-educated billionaire parents wanted me to grow up in a world that’s worse than ours today, I’d already have crawled my way to a phone booth and dialled 911 to alert the authorities.

That goes for "a world without suffering from disease” too. Wow. Where do you get this stuff, Daddy? I heard more original ideas when I was a single cell blastula!

"Technological progress in every field means your life should be dramatically better than ours today."

I’d like to think so too, Daddy, but there’s this thing that’s bothering me.

And not just Facebook, it’s the way Silicon Valley companies like yours pile up huge wealth by destroying value in every other part of the economy, as if technological progress were a zero sum game. It’s the way you strip-mine individuals so they have no ability to be autonomous economic agents, owning and trading the stuff we make, so all we have to live on is some feudal digital plantation - and we have to be grateful for it. It's the way some Valley firms place themselves above the law and try to block the work of elected officials who want to defend human rights.

Not you of course, Daddy. Just some of your friends.

I mean, come on. There's a lot to teach children in this modern world I've just been born into. But one thing we've got to learn is that just because you can do something, it's not necessarily morally acceptable to do it. Who's going to teach me that in Silicon Valley?

And Daddy. Connecting people all over the world through an internet website is very cool idea indeed. But it's not that cool or original. It’s as if the guy who invented the bottle-opener wrote a plan to become Emperor of the World. Like, "Remind me who you are again?"

I think that’s pretty weird already. And I’m only one day old!

Well if there’s any of the economy left by the time I graduate, perhaps my generation will be a bit less selfish than yours, Daddy, and we can teach you about it.

Oh. And there’s one more thing.

"Many of the greatest opportunities for your generation will come from giving everyone access to the internet… more than half of the world's population -- more than 4 billion people -- don't have access to the internet. If our generation connects them, we can lift hundreds of millions of people out of poverty. We can also help hundreds of millions of children get an education and save millions of lives by helping people avoid disease."

It’s way cool that you want to bring Facebook to people who can’t afford it, Daddy. That’s the most unselfish thing I’ve heard anyone say in my very short life so far.

But there’s also 1.6 billion people on the planet who don’t have access to electricity, while 2.8 billion people rely on smelly and noxious biomass for cooking and fuel. How about we get them modern electricity grids and cheap reliable energy first? What’s that Daddy? You think that’s a good idea too?

So why isn’t access to electricity a UN Millennium Development Goal? Rather than Access to Facebook? It’s almost like we like the idea of them staying really poor. And seeing how often you call that guy you call Barry, who calls himself President, perhaps you can help get it on the agenda.

Well, I’m kinda tired writing all that. It’s time for nap. Just remember when you’re burping me, do it over your shoulder, that way I won’t puke all down your front.