Just in time for Christmas, Santa! 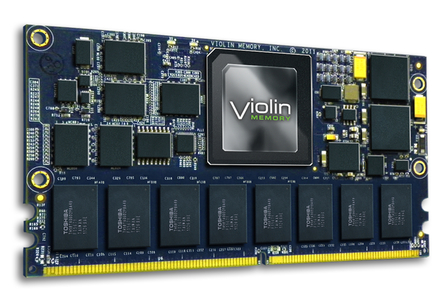 The 3U 7600, providing from 35TB to 140TB of raw capacity, is characterized as an extreme performance array. It delivers 1.1 million IOPS with less than 500-microsecond latency. Violin says this reduces "the latency by half, as compared to current all flash arrays in the market." Its density means customers can "consolidate mixed and multiple workloads in the lowest footprint possible, outclassing all competitive products."

The 7250 is positioned as a less-than-$100,000 entry-level system with always-on data reduction. It starts at 8TB of raw capacity, and can scale in capacity and/or performance.

The 3U FSP 7300 – think of it as a converged and integrated Concerto data services head and 6000 array – supports from 11 to 70TB of raw flash (up to 217TB effective maximum capacity after inline dedupe and compression).

With the new models, Violin's raw capacity ranges from 8TB in a sub-$100K system, up to 422TB, with performance maxing out at 2.2 million IOPS.

Violin says the 7000 series has asynchronous replication, synchronous mirroring, stretch clustering with zero RPO and zero RTO, snapshots, clones, and other data management services. The two new systems are offered with pay-as-you-grow pricing, meaning they are delivered effectively fully configured, and extra capacity is switched in via a software licensing upgrade paid for when the capacity is needed.

A lot is riding on these systems. Hopefully Violin's existing customers will view them positively, and the 7250 will expand its market downwards to new customers, with a consequent much-needed revenue boost. ®